Home » Movies in English » The Navigator: A Medieval Odyssey 1988

The Navigator: A Medieval Odyssey 1988

A young boy in 14th century Cumbria (north of England) keeps getting visions he cannot explain. His village has so far been spared from the black death, but the villagers fear its imminent arrival. With the boy as their guide, a group set out to dig a hole to the other side of the world, so as to fulfil the visions and save the village. At the ‘other side’ is 20th century New Zealand !.. N.B. Flips from B+W to colour frequently.

This film is almost unknown. None of the cast ever achieved fame, and Vincent Ward, while an able director, is not very prolific. However, I still cherish my memories of this movie. I saw it nearly 11 years ago, and every detail , and all of the performances, are still fresh in my mind. It is a fantasy of extraordinary beauty, which does not use a single special effect, and which conveys the thoughts and beliefs of “mediaeval” peasants better than a dozen high-priced epics. 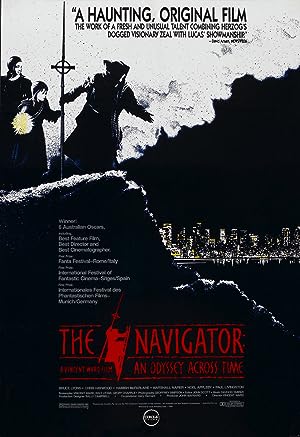 Be the first to review “The Navigator: A Medieval Odyssey 1988” Cancel reply