Nickel Children is a narrative drama that takes the perspective of two runaways, Cat (Tamara Hope: Shall We Dance, The Deep End) and Nola Reiley McClendon: Perl Harbor, The Kid) and reveals the harsh realities of life on the streets of Los Angeles. Relying only on their instincts and the fleeting kindness of strangers, Cat and Nolan navigate their way through a world infested with prostitution, drugs, and violent predators. Every minute they remain on the streets, they fall deeper into a game of chance where they gamble with their lives. Cat and Nolan must devise a plan of escape before time finally runs out.

I was lucky enough to attend the May 19th screening of The Nickel Children in San Diego and I have to say…I can see why Eric Litra’s script was a winner in the Nicholl’s Fellowship Screen writing Competition, a hard contest to win. Although a sad story, it opened up the audience to a world that we only “hear” about in passing. . . or maybe on TV once in awhile in a documentary or on the news. If you are not involved in some way in this world; know someone in it, work with the kids to get them out, been in it yourself, the movie really opens up your eyes to the heartache of it. Ryan Johnson of Pretty Dangerous Films and Glen Klinker (Director) (nice guys!) did a great job bringing the script to life, as well as the wonderful actors involved. Being a writer myself, I loved that PDF and Glen pretty much kept Eric Litra’s script the same, (only one change) and kept him on as the only writer. That’s not always the norm in this “movie making” biz, and I’m sure Eric appreciated it. Great job all! Go see this movie. It will touch your heart. 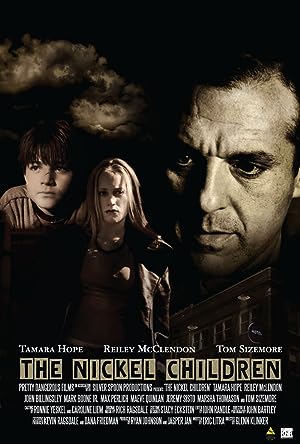 2 reviews for The Nickel Children 2005