Home » Movies in English » The Odd Life of Timothy Green 2012

The Odd Life of Timothy Green 2012

After receiving bad news from a fertility doctor, Cindy and Jim Green try to bury their dreams of having a child by writing out all the great traits their child would have and putting them in a box in the garden. During a freak storm in the middle of the night, they awake to find a boy named Timothy, with leaves growing from his ankles, standing in their kitchen calling them mom and dad. Cindy and Jim are thrown into the midst of parenthood and over the coming months, Timothy will teach them more than they could have imagined about being parents and raising a child, no matter how he comes into their lives.

If you remember the good old days when the story was in the forefront and people dedicated months and years into character development then yes this film is for you. With the way Hollywood has become a sci-fi shoot em slash em industry films with heart and simplistic storytelling get lost in the fray but are very necessary. It starts out slow and on the nose but once timothy shows up the film shines. You find yourself engulfed into the couples life and not wanting the show to end. When you feel like you know the story and the characters then that means you watched a great film. As film makers and critics and people with the option to voice that instantly its very easy to forget that hey the reason you arnt rushing to see the film or tell people about it is because they did their job so well you felt like you knew them. It is easy to see a film and break down cuts, and fades and length of scenes but this film was one of those ones where you didn’t care if it was formulaic at parts or if it was too heartfelt and sappy in others. It was such a joy that simple and deep character development still happens and its an artform I hope we never lose. 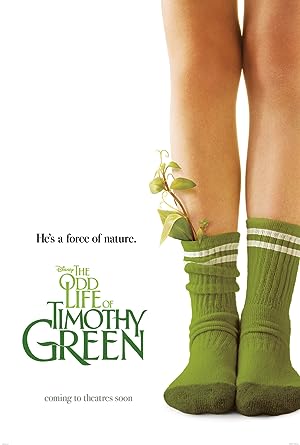 The Odd Life of Timothy Green (2012)
105 min|Comedy, Drama, Family, Fantasy|15 Aug 2012
6.6Rating: 6.6 / 10 from 42,683 users
A childless couple bury a box in their backyard, containing all of their wishes for an infant. Soon, a child is born, though Timothy Green is not all that he appears.
Director: Peter Hedges
Creator: Peter Hedges (screenplay), Ahmet Zappa (story)
Actors: Jennifer Garner, Joel Edgerton, CJ Adams, Odeya Rush