Home » Non-English with Subtitles » The Ornithologist 2016 with English Subtitles

The Ornithologist 2016 with English Subtitles

Fernando, a solitary ornithologist, is looking for black storks when he is swept away by the rapids. Rescued by a couple of Chinese pilgrims, he plunges into an eerie and dark forest, trying to get back on his track.

A staunch queer cinema visionary and nonconformist, Portuguese filmmaker João Pedro Rodrigues’ fifth feature beguilingly takes a leap of faith onto a religious theme, a pilgrimage to Saint Anthony of Padua, conspicuously transcribing its story into the existential trials and tribulations of our titular ornithologist Fernando (Hamy), which is also St. Anthony’s birth name, stranded in a modern-day Portuguese waterway and forests.

Fernando, an atheist from the word go, embarks on his stork-scouting journey with gusto and alacrity, and the implication that it is not his first sortie in the area makes his adventure quite up his alley. Few background information is purveyed, other than he is under medication and has a male lover who is caring for him. Contrasting Fernando’s bird-watching/telescopic angle with different bird’s-eye views, it is the modus operandi brings home a numinous frisson of watching and simultaneously being watched, literally sublimates the nature’s gaze with a plethora of wild feathered friends hovering around incessantly through the film. When Fernando’s kayak is upset during the rapids, the story starts to take shape into a multi-layered religious mythology through Fernando’s various real/surreal encounters, garnished with sexual innuendos (undressed and tied- up by two young Chinese female God-bothers, a sadomasochistic position enticing one’s fantasy; the urolagnia experience in the darkness among a contingent of masqueraded roarers), and an in- the-buff dalliance with a deaf-mute shepherd boy named Jesus (Cagiao), which ends in manslaughter, a startling incident but concocted with blasé wantonness.

Conceivably, when one liquidates Jesus, there is nothing but a road to redemption beckons him, Fernando must carry on his mythical transmogrification into a pious St. Antony by dint of his self- inflicted ritual for absolution (that is where symbolic tunnel, tableaux vivants and inscrutable gestures abound), consummated by being dispatched by the alter ego of Jesus, an eye for an eye and a tooth for a tooth, if credits must be given to Rodrigues’ wheeze of contemplating a grand mythos within an entrancing temporal sphere, his didactic exegesis is less a merit to be reckoned with.

Leading actor Paul Hamy credibly shoulders on a role which requires boldness and physical exertion, instils his open-faced earthiness into the overlaying mystique and alone-in-the-woods background, which successfully retains Fernando in the cynosure, even when narrative longueur inevitably lurks. Tellingly, the film renders a captivating landscape to those eyes yearning for natural’s majestic design, whether it is the picturesque on the surface or the uncanny residing in the deep, also the foley artists (Nuno Carvalho and Martin Delzescaux) ply their own distinctive aural intrusion to that latter effect: eerie, preternatural and strident. In the end of the day, THE ORNITHOLOGIST is another contrived fable trying to mythicize religion in order to elicit a sense of meta-sanctity of our own existence, but the fruition thuddingly slumps between artsy-fartsy and nonplussing, on top of that, where are the storks, anyway? 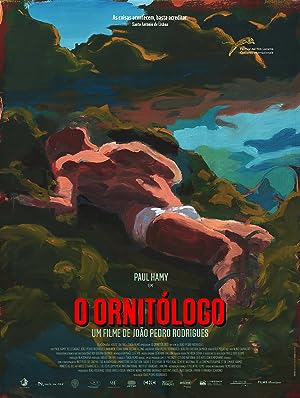 2 reviews for The Ornithologist 2016 with English Subtitles