In the summer of 1935, 12-year-old twins Niles and Holland Perry live with their family on a Connecticut farm. Their loving grandmother Ada has taught them something called “the game.” A number of accidents begin happening, and it seems to Niles that Holland is responsible. It is Ada who begins to see the truth, and she is the only one who can stop this macabre game of murder.

Many horror fans, and those who try to write such stories, understand that Stephen King has taken inspiration from the work of others. And there can be little doubt King was greatly influenced by Thomas Tryon’s outstanding novels Harvest Home and The Other.

The TV movie version of The Other enjoyed good-ratings and critical acclaim when it was first broadcast on CBS in 1972. Although Stephen King was actively writing horror at the time, I suspect he took subtle cues from The Other. Among other things, little Danny Torrance’s psychic manifestation of “the shining” is curiously similar to a phenomena called “playing the game” in Tryon’s story.

Thomas Tryon wrote with an elegant style somewhat reminiscent of H.P. Lovecraft’s. His plots were engaging, his characters interesting and well developed, and his New England settings evoked the gloom and obscure anxiety traditionally associated with that region. So why has his work faded into near-obscurity while King’s is heralded as the greatest in the history of horror?

Regrettably, Tryon, who was one of the most highly regarded young actors in Hollywood, started writing rather late in life and died while his creative powers were waning. He also chose to explore genres other than the Gothic (with generally good results.) There is also a more staid, pre-World War II air about his work that might not appeal King’s core audience. Nevertheless, Tryon’s Gothic efforts translated wonderfully onto the small screen, and he deserves a well-deserved place in the pantheon of American Gothic writers.

Thankfully, American Movie Classics has begun airing The Other again, and a new generation of fans now has the opportunity to enjoy this seminal work of cinematic horror. 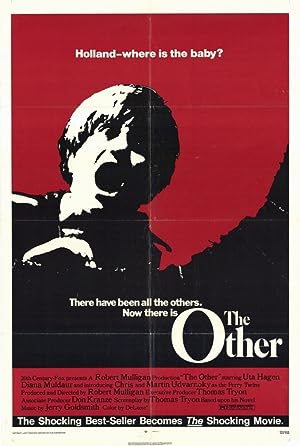 The Other (1972)
108 min|Drama, Horror, Mystery, Thriller|26 May 1972
7.0Rating: 7.0 / 10 from 5,076 users
Down in the farm country of the US twins are born. One of them turns out to be good, while the other becomes rather evil.
Director: Robert Mulligan
Creator: Tom Tryon (screenplay), Tom Tryon (novel)
Actors: Uta Hagen, Diana Muldaur, Chris Udvarnoky, Martin Udvarnoky