A parody/homage to Gilbert and Sullivan’s Pirates of Penzance, The Pirate Movie is a comedy/musical utilizing both new songs and parodies from the original, as well as references to popular films of the time, including Star Wars and Raiders of the Lost Ark. In your typical boy meets girl, boy loses girl, boy fights girl with swords plot, the story revolves around Mabel, the youngest of Maj. Gen. Stanley’s many daughters, and Frederic, an ex-Pirate of Penzance. They fall in love and proceed to retrieve the Stanley’s fortune from the Pirates (stolen 20 years ago). The Pirate King informs Frederic that due to him being born on Feb. 29th (during a leap year), Frederic is still technically the King’s apprentice. Frederic must then decide between duty and honor, the only good qualities the King taught him, and true love.

I have also been watching this movie since I was in grade one! I fell in love with it, and so did all the females in the family! We have watched it way over 200 times, know all the words, and songs, and even the dance moves (heehee)! One time we had to bring it back to the videostore, after watching it non stop for 2 days, and we were wishing we kept it. So we were flipping channels, and what should appear? The (original)Pirates of Penzance!!! Now, almost 25 years later we introduced my 3 year old niece to it. She LOVES it! She has watched it at least 3 times a day over a 2 week period. She’s learning the words and singing the songs…and just absolutely adores Happy Ending! So the tradition lives on….

For I am the Pirate King, I don’t buy this orphan thing, we’ll go away without dismay, but we’ll be returning….

TED HAMILTON, WHERE ARE YOU?!!!??? LONG LIVE THE PIRATE KING! 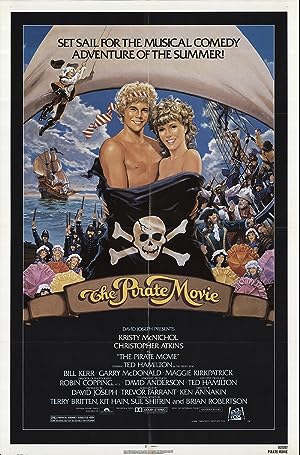 The Pirate Movie (1982)
98 min|Adventure, Comedy, Musical, Romance|06 Aug 1982
5.1Rating: 5.1 / 10 from 3,752 users
The crew of a large ship sail the high seas encountering other pirates from other ships. The boy from the ship ends up having to save his girlfriend who is kidnapped by a bunch of other pirates.
Director: Ken Annakin
Creator: W.S. Gilbert (operetta), Trevor Farrant
Actors: Kristy McNichol, Christopher Atkins, Ted Hamilton, Bill Kerr

Be the first to review “The Pirate Movie 1982” Cancel reply