Diz (Joel Courtney) is a reckless teenage drifter living life on the run. Abandoned by his parents as a child, he looks out for himself and doesn’t accept handouts. He takes whatever he wants and runs. Jaded and determined to answer to no one, Diz lives a life marked by thievery and abandonment. Things change for Diz when he floats into a small town on the Snake River. There he is confronted by an unflappable old man named Marty and falls for Marty’s guarded granddaughter, Selah. When Diz robs a local drug-dealing crazy, he becomes the owner of a giant pile of cash and the target of two vicious killers. With more money than he knows what to do with, and criminals at his heels, Diz puts the people he’s learned to care about in danger, still trying to win Selah. But some things can’t be stolen or bought. The River Thief is a film about guilt, self-sacrifice, and accepting life as a gift.

If you’re familiar with N.D. Wilson’s children’s novels, you know you’re in for a treat with The River Thief, his first feature film.

This film breaks from the typical Christian film by telling a good story first and foremost. A lost, father-hungry boy discovering true love. Not the sappy, romantic love of your typical Hollywood flick (this girl wouldn’t have any of that), but rather the kind of love that creates a longing to live or die for someone else (something new for Diz).

A wonderful family film, although there are some rough scenes. My 7-year-old son was spellbound, and somewhat affected by the rough parts. Yet this is the kind of story that is healthy. The emotion, drama, and violence of this *good* story are like emotional boot camp; it allows a young boy or girl to experience these emotions of grief and fear along with the positive life lesson that a good story provides.

As a resident of the Northwest where this was shot, I also appreciated the cinematography, which was outstanding! Beautiful aerial views in particular. I highly recommend The River Thief! 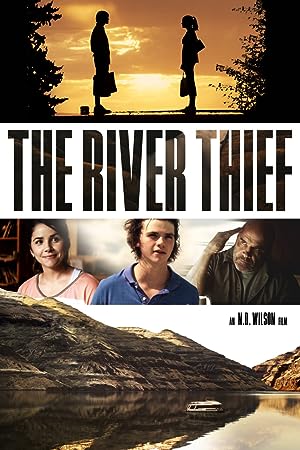 The River Thief (2016)
87 min|Action, Adventure, Crime|14 Oct 2016
5.5Rating: 5.5 / 10 from 401 users
Diz (Joel Courtney) is a reckless teenage drifter living life on the run. Abandoned by his parents as a child, he looks out for himself and doesn't accept handouts. He takes whatever he …
Director: N.D. Wilson
Creator: N.D. Wilson
Actors: Joel Courtney, Paul Johansson, Bas Rutten, Raleigh Cain