An official selection at the Cannes Film Festival, The Selfish Giant is a contemporary fable about 13 year old Arbor (Conner Chapman) and his best friend Swifty (Shaun Thomas). Excluded from school and outsiders in their own neighborhood, the two boys meet Kitten (Sean Gilder), a local scrap dealer. Wandering their town with just a horse and a cart, they begin collecting scrap metal for him. Swifty has a natural gift with horses while Arbor emulates Kitten – keen to impress him and make some money. However, Kitten favors Swifty, leaving Arbor feeling hurt and excluded, driving a wedge between the boys. As Arbor becomes increasingly greedy and exploitative, tensions build, leading to a tragic event that transforms them all.

In the Giant’s garden in Oscar Wilde’s children’s story The Selfish Giant, it is always winter. Having built a wall to keep children from playing in his garden, there are no longer any peach trees, flowers, or birds, only perpetual hail and snow. Spring has forgotten this garden as it also seems to have forgotten the industrial town of Bradford in West Yorkshire, England, the setting for Clio Barnard’s authentic and visceral The Selfish Giant. Nominated for a BAFTA award for Best British Film of 2013, The Selfish Giant is in the tradition of Ken Loach, Shane Meadows and others, films of social realism that show the world there is more to merry old England than Stratford-on-Avon and Westminster Abbey.

Though the film is about economic and social dysfunction, it is not all grim. Even in the metallic gray of the rotting town as captured by cinematographer Mike Eley, scenes of horses grazing in a tranquil field, oblivious to the surrounding train tracks and power lines, add a touch of timeless beauty. The real standout, however, are the remarkably convincing performances of Arbor (Conner Chapman) and Swifty (Shaun Thomas), 13-year-old best friends whose connection is born out of their desperate need for affection. Arbor, a pint-sized, hyperactive, sharp-tongued ADHD sufferer, lives with his mother (Rebecca Manley) and older brother (Elliott Tittensor) who sells his A.D.H.D. medication to pay off his drug debts. His father is nowhere to be seen.

“They sleep on the living room sofas but are better off than Swifty who lives with his eight siblings in a home lacking in the means to support them. Swifty’s mother played by Siobhan Finneran, is caring, though she is intimidated by her overbearing husband (Steve Evets) who supports the family by renting furniture from discount stores and selling them for cash at inflated prices.” Struggling to keep his aggressive behavior in check, Arbor relies on the heavy-set Swifty, a kinder gentler soul with a love for horses to calm him down. Banned from school as a result of fighting to defend themselves against bullies, the boys use a horse and cart to scavenge scrap metal, pots and pans, as well as copper cabling from telecom, railway, and power utilities.

To earn money to help support their families, they sell the scrap to an exploitative but fatherly local junk dealer (Sean Gilder), incongruously called Kitten but given to bursts of anger. In one of the visual highlights of the film, an illegal harness drag race is run on a major highway with serious money at stake. Recognizing Swifty’s way with horses, Kitten offers to let him ride one of his horses in the next race. Feeling his friend drifting away from him, Arbor concocts a potentially lucrative plan to steal or collect electrical power cables, but the adventure leads to unforeseen consequences. Much of the dialogue without subtitles is indecipherable due to the heavy Yorkshire accents, but consists mostly of non-stop swearing anyway.

What does come through loud and clear, however, without the need for subtitles is the closeness of the boys’ friendship. Although they have different temperaments, they are connected by a struggle for survival and a drive to preserve whatever joy is left in their childhood. There are definitely economic and political overtones in The Selfish Giant, yet it is not about politics or even selfishness, in spite of the title. It is a film with a human element at its core and we care about the characters as Barnard obviously does as well. According to the director, the film “is about what we have lost…and what we need to value and hold on to.” It is also a film about the resilience of two boys determined to avoid becoming objects like the discarded scrap they collect. 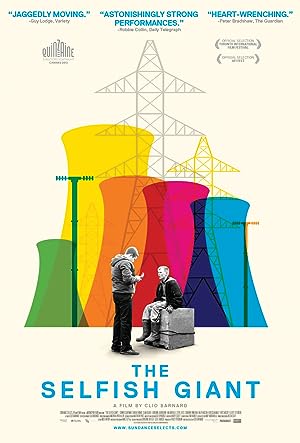 Be the first to review “The Selfish Giant 2013” Cancel reply