Home » Non-English with Subtitles » The Swamp 2001 with English Subtitles

The Swamp 2001 with English Subtitles

Chekhov in contemporary Argentina. Mecha and Gregorio are at their rundown country place near La Ciénaga with their teen children. It’s hot. The adults drink constantly; Mecha cuts herself, engendering a trip to the hospital and a visit from her son José. A cousin, Tali, brings her children. The kids are on their own, sunbathing by the filthy pool, dancing in town, running in the hills with shotguns, driving cars without licenses. One of the teen girls loves Isabel, a family servant constantly accused of stealing. Mother and son, son and sisters, teen and Isabel are in each other’s beds and bathrooms with a creepy intimacy. With no adults paying attention, who’s at risk?

excerpt, more at my location – La Cienaga, or The Swamp, is the debut film from Argentine filmmaker Lucrecia Martel. Originally released in 2001, the film announced the arrival of a unique new voice within international cinema. Finally granted a DVD release in the UK, it shows that the director of The Holy Girl and The Headless Woman had emerged with her distinctive and uncompromising vision of cinema already fully formed.

Beneath the surface banality of La Cienaga lies a resonant and troubling picture, the work of a filmmaker with a considered and singular artistic vision. Even if Martel’s particular vision is likely to repel as many as it attracts, her film possesses a lingering, haunting power. Not especially enjoyable, but undeniably affecting. 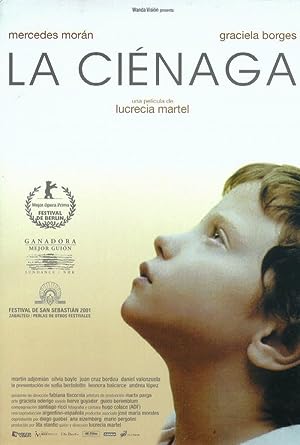