Ellie O’Brien (List) is trying to juggle rhythmic gymnastics and troubles with her best friend. Meanwhile, classmate Jack Malloy (Bertrand) is struggling to live up to his brothers’ hockey-star legacies and his dad’s high expectations and tough-love approach. When a text argument about whose life is easier gets out of hand, Ellie and Jack trigger an explainable real-life swap. As each tries to navigate the other’s life, hilarity ensues when Ellie (as Jack) learns about brotherly bonding and hockey lingo, while Jack (as Ellie) has to decipher girl code and experiences a spa day. With a rhythmic gymnastics championship and a spot on the varsity hockey team on the line, they must figure out how to get back in their own bodies before the swap becomes permanent. As they are forced to literally walk in each other’s shoes, they gain empathy for one another and learn valuable lessons about their own lives.

Going back to the original Freaky Friday from the 70s that starred Barbara Harris and Jodie Foster, Disney and other studios have done these body transference films. Absolutely no new ground was broken here with The Swap.

Gymnastic champion Peyton List and young hockey prospect Jacob Bertrand occupy different worlds in the high school social strata. She’s got some fierce and jealous competition from the usual mean girls you find in these teen films who always get their’s. Bertrand is a young hockey player trying to measure up to his coach father and his two older hockey playing brothers.

Those cellphones that fewer and fewer of us don’t have, but that teens have found to be necessary like breathing in this day and age have a magic power and through them the body transference is accomplished. And they have to live with each other’s lives.

Both List and Bertrand are stars of Magic Kingdom TV Teen series, Bunk’d and Kirby Buckets. It’s always Disney policy to give its budding teen stars TV feature film exposure. The stars are good in their roles and they are supported by a cast of Canadian players.

The Swap is easy to take, but nothing new. 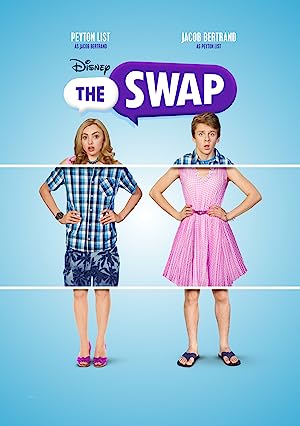 Be the first to review “The Swap 2016” Cancel reply