Two teenage boys break free from school to embark on a dangerous adventure, as they truant their way across the threatening industrial landscape which surrounds them.

Following the devastatingly hard-hitting Throw Me to the Dogs, promising and visceral director Aaron Dunleavy blesses the short film scene with this equally realistic drama, The Truants.

Alike his previous effort, The Truants is set in Blackburn. It instantly opens on two teenagers escaping from school, who then go on to gallivant around in industrial locales. They then come across an intellectually hapless man, whom is soon victimised.

The cast is comprised of newcomers. Kallum Trueman and Leo Halstead give surprisingly solid performances as they commit to the film’s message in motion with superb adlibbing for their young age. A major factor of this film, though, is clearly evident in Jack Hartley’s notably believable performance as the outlet of these teens’ antisocialism. His vulnerability as a gullible, meek and mentally deficient young man is almost tangible when you see what he is subjected to. I mostly forgot that these were performances, and extra credit is due to Hartley’s layered improvisation.

Dunleavy has perhaps solidified his style, for better or worse, but mostly better. Starting with the not-so-good, The Truants adheres to noticeably familiar narrative and themes to Throw Me to the Dogs. However, this can be rectified, as this filmic structure is memorable and well-made. With a stylistic sense that feels both neorealist and Shakespearean, we sense themes of antisocialism and neglect, followed by witnessing actions of bullying and finally tragedy. Malevolent actions and harshly delivered dialogue are mainly what paints the picture for this short. While this might sound like a hard watch, it is, in fact, what make The Truants great.

A synopsis for the film includes “threatening industrial landscape that surrounds them”. Referring to the two teenagers, this acts as a juxtaposition to the events in the film. The way I interpret the film is – in this reality – the teens’ threatening environment has already accomplished its distasteful influence. They have now become the threat. That landscape has already shaped them into delinquency and violence, just like the “lads” in Throw me to the Dogs. And the lesser man is the target in this unforgiving world they inhabit.

Its beautiful wide shots encompass the notion that harmful environments overtake people’s morality and development; its characters and their dialogue are believable enough to feel like you are watching a documentary; and the events of the film will make you occasionally want to look away. These are a couple of factors that makes The Truants a bleak but incredibly realistic and compelling study of antisocialism, neglect, delinquency and bullying. Watch it for uncompromising grittiness. 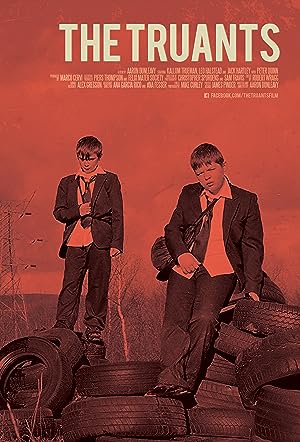 Be the first to review “The Truants 2016” Cancel reply