The Wayward Cloud 2005 with English Subtitles

Metaphor, allegory. There’s a drought in Taiwan. Watermelon are abundant and become juice, food, something to share with a guest, and an aphrodisiac. In a large building of flats, Hsiao-Kang and Shiang-chyi’s paths cross; she knew him when he sold watches, now he acts in pornographic films. She scavenges for plastic water bottles. He bathes in the building’s cistern. Fantasy song and dance numbers punctuate the characters’ nearly aimless pursuits: she has lost her keys and he helps her find them; he naps in a park, she watches; he smokes on the floor beneath her kitchen table while she sits. His film-making continues. Can they connect?

Watching Tian bian yi duo yun ( The Wayward Cloud ) is a really weird experience. I didn’t whether to laugh or cry, to celebrate the brilliance of the film, to recoil in shock from the grittiness or to wince at the absurd campiness.

Its amazing how Tsai Ming-Liang manages to get the cast to emote so much through so little dialogue, how he builds an electrifying atmosphere through minimal use of music (except for the campy nostalgic music videos … really something else altogether, a see to believe phenomenon). 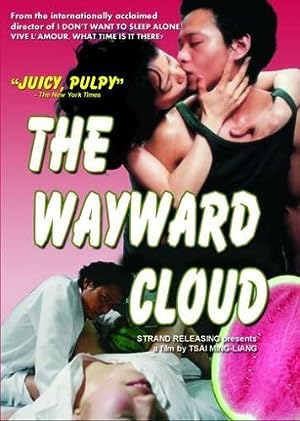