Tom Sawyer and his pal Huckleberry Finn have great adventures on the Mississippi River, pretending to be pirates, attending their own funeral, and witnessing a murder.

This film captures the essence of Tom Sawyer. The wonder and freedom of childhood, and the struggles of growing up. Johnny Whitaker gives the best performance of his career, portraying Tom as mischievous and clever, yet lovable and innocent. This is not the Tom so often portrayed in films, who is a conniving brat. This is the Tom of the book who gets in trouble because he is curious and adventurous, whose mind wanders in church and school, and who stretches the truth or even fibs without malicious intent.

The rest of the cast is excellent, The production appears to be on location and is very authentic, and the music is well done. This is a true musical in that the lyrics serve to move the story along. If you like musicals, this is for you. If you don’t, then concentrate on the lyrics and what they are telling you about the central character. 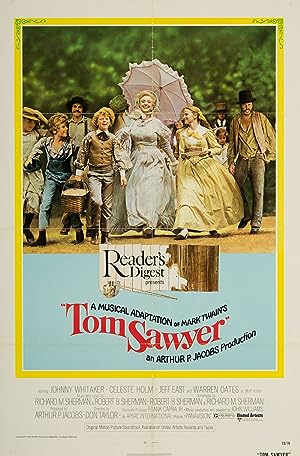 Be the first to review “Tom Sawyer 1973” Cancel reply