Southern Californian Bree Osbourne, formerly Stanley Chupak, has finally received the news for which she has been waiting: she has been approved for male-to-female sexual reassignment surgery. But before Margaret, her therapist, will allow her to go through with the surgery scheduled in a week’s time, Bree has to deal with an unresolved problem from her past. Bree gets a telephone call from a seventeen year old man named Toby Wilkins, who is looking for Stanley, his biological father. Toby is in a New York jail, having been supporting himself by petty crime and hustling. Stanley/Bree knew nothing about Toby before the telephone call. Toby apparently is all alone in the world, with his mother having committed suicide and being estranged from his stepfather in Tennessee. Masquerading as a Christian social worker, Bree, not telling him either of her true identity or her transgender status, bails Toby out of jail and tells him she will take him to Los Angeles, where Toby has aspirations of becoming a porn actor and reconnecting with his biological father. As Bree and Toby take their trans-American journey which includes some interesting encounters along the way, Bree has to decide what is best for Toby while having the foremost goal of making it back to Los Angeles for the scheduled surgery.

I was excited to be involved in a film concerning trans-gendering. I was particularly happy about the exquisite care taken by the writer/director, Duncan Tucker, and the stars Felicity Huffman and Kevin Zeger to NOT trivialize or titillate the issue. A very good film. The humor and relevance of this film seems, to me, to be self-explanatory in this global and interactive world. I think this film could be educational, entertaining and a calming influence in a world that is increasingly diverse.

As far as production values, I was pleasantly surprised to see that the film did not look “low budget”. The settings, cinematography, acting and directing was as professional as anything I’ve EVER seen. Very Good Job by all involved. KUDOS!!!! 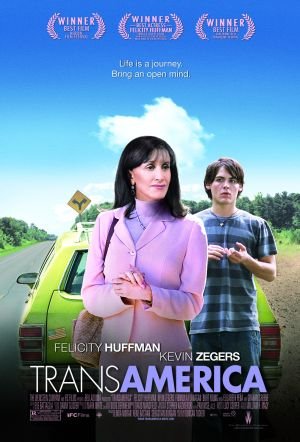 Be the first to review “Transamerica 2005” Cancel reply