Tree Without Leaves 1986 with English Subtitles

Haru, an aging scriptwriter, has isolated himself somewhere in the woods of Nagano to work on his first novel. As the last surviving member of his kin, he intends to chronicle the family he grew up in.

Its a common story: a human damaged by parents. Its common enough in life to resonate with nearly every viewer, which is a plus. But its so common that it needs some novelty with the similarly required depth. I do not know whether this is from Shindo’s life or not, but I suspect so from the rich details that can only have been pulled from life as obvious memories.

The story is simple. A boy has a mother who is dedicated to him in every way, emotionally engaged and prepared for extreme sacrifice for the smallest pleasure for him. On the other side is a father so stern he makes Bergman’s Scandinavian Lutherans seem mild. The mother dies when the boy is 11; all the siblings have fled and the boy at the end is stuck with his father, penniless. The thing is framed as the book the boy writes, now old and missing key parts of his soul. Lots of snow. Lots of lonely stares that contrast with the wide eyes of the boy, selfish and demanding.

It works. It works because its gentle, a gentle knife that wounds. In the west, you’d have Nick Nolte shouting. Beatings. Dark drama and loud. Here, the routineness of how bleakness seeps is much more disturbing. Everything is beautiful.

The anchor scene. There’s usually one in such compositions, and here it is obvious because it is recalled a dozen times and repeated about half that. The boy and his sister are in the field playing. Tossing sandals in the air and pretending they are bats. We see the bats in their imagination as they attempt to catch them, which of course they are, continuing to keep them flying. The saintlike mother calls them for supper, which we know was painstakingly and perfectly prepared.

The children ignore her, playing with their imaginary hauntings in fun because they know they can control them. It builds and builds in resonance each occurrence, obviously the center of the movie the adult plays over and over in his head.

One other scene is rather amazing. It may just be a cultural thing, but it registered with me as a gentle shock, a shock of gentleness.

Early on, we find that the boy suckles until his mother dies. We see this at the beginning of the childhood story, which lasts about a year. The boy is ten and he is sucking on a 51 year old breast, lovingly offered. This is context for many, many other scenes in which this boy is the center of her entire world, and he obvious fills space vacated by the stern father, himself obviously damaged.

The scene I’m talking about is a bathing scene where the mother is bathing her boy, obviously something any other ten year old would do for himself. They are situated — him standing, her sitting — so that when she leans over to kiss him it is a peck on his penis, or maybe not. But the scene is remembered again about 40 minutes later. By this time we’ve been introduced to the grown man’s sometime mistress and a cold affair. This time we see the same scene slightly differently, clearly and yes, a genital brush, perhaps imagined. Perhaps a bat.

There’s no hit of sexual intent. And the aura is so sweet one never imagines one. But it was something that had edge, like acrid blossoms and so registered, which I suppose was the intent. 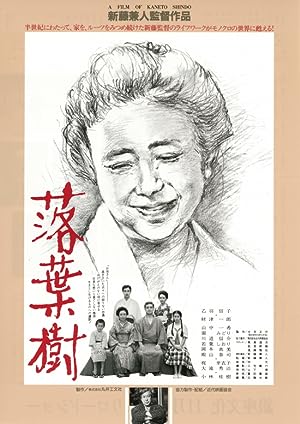 Tree Without Leaves (1986)
105 min|Drama|15 Nov 1986
8.2Rating: 8.2 / 10 from 909 users
Haru, an aging scriptwriter, has isolated himself somewhere in the woods of Nagano to work on his first novel. As the last surviving member of his kin, he intends to chronicle the family he grew up in.
Director: Kaneto Shindô
Creator: Kaneto Shindô
Actors: Keiju Kobayashi, Nobuko Otowa, Ichirô Zaitsu, Meiko Kaji

2 reviews for Tree Without Leaves 1986 with English Subtitles