A suspenseful, psychological thriller, “Truth” exposes the hidden demons buried deep inside each and every one of us. After a chance encounter over the Internet, Caleb, who suffers from borderline personality disorder, meets and falls head over heels for Jeremy, and soon the line between love and lies blur. Struggling to keep his past a secret, including his mentally ill mother, Caleb slowly succumbs to his darker side. A sudden turn of events finds Jeremy held captive, until Caleb’s quest for the truth be revealed.

Quite honestly I’m not sure what to think of it all. A “suspenseful, psychological thriller,” it was not.

One of the two central characters, Caleb, has enough personal baggage to sink a ship although at least outwardly he seems to be coping with it all reasonably well at the start of the story. He meets Jeremy whose background has been less of a train wreck than Caleb’s but he’s not dealing especially well with the pressures that society and family put on gay men of his age. Through experience Jeremy has learned to use deception and denial in dealing with other people and with his perception of self. That this does not lead to a “they lived happily ever after ending” is not particularly surprising.

In the “storyline” description it states that Truth “exposes the hidden demons buried deep inside each and every one of us.” Whoa. We may all have our secrets and have had experiences that affect the way we deal with others, but I doubt most of us are as burdened as Caleb nor do most of us resort to such manifest deception as does Jeremy.

The damage caused by a “Mommy dearest” and the need to remain “closeted” for survival are fairly common themes in gay drama, but this movie tries too desperately to pile it on and thrill us with the resultant mayhem.

It all just seemed a bit too much. From the start the relationship between Caleb and Jeremy seemed more weird than genuine and as it began to unravel the situations weren’t particularly suspenseful or psychologically deep.

The actors, especially Sean Paul Lockhart, were good. The overall quality of the production was also quite good. The general result, however, seemed superficial, heavy-handed, inevitable & propelled by contrived events. 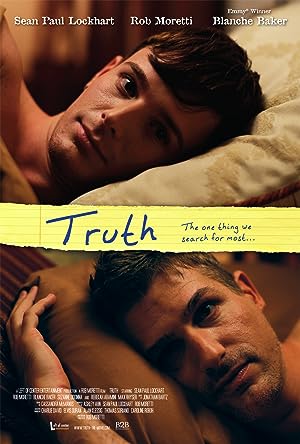 Truth (2013)
94 min|Drama, Romance, Thriller|11 Feb 2014
5.0Rating: 5.0 / 10 from 486 users
A suspenseful, psychological thriller, "Truth" exposes the hidden demons buried deep inside each and every one of us. After a chance encounter over the Internet, Caleb, who suffers from …
Director: Rob Moretti
Creator: Rob Moretti
Actors: Rebekah Aramini, Blanche Baker, Angel Brazier, Kimberly Colyer

Be the first to review “Truth 2013” Cancel reply