In a warm town of Marseille, a teenager, clamped among a crazy mother and an alcoholic father, looks desperately for tenderness. On bottom of gloomy suburb, Bertrand Blier delivers, once more, an unclassifiable film and gladly provocative, who can leave you perplexed but not indifferent.

I have only seen 3 Bertrand Blier movies, but this one is easily my favorite of the 3. BUFFET FROID, starring Gerard Depardieu, was the first I saw — and the fact that it was basically plot less and full of absurdist humor made it instantly a favored flick. I more recently saw Blier’s Oscar-winning GET OUT YOUR HANDKERCHIEFS but thought it was a little too conventional and strained next to the more flat-out freewheeling BUFFET. About 15 years after that pair of movies comes this one, which marries the sensibilities of the other two perfectly. Like HANDKERCHIEFS, it actually has a story, but like BUFFET, it doesn’t bother with real-world logic, good taste, or linear chronology in telling that story. SOLEIL is sort of a movie about coming-of-age in the projects, sort of a movie about sexual psychology, and sort of a cut-and-pasted collage of unusual moments. The magical thing is that the damn thing winds up more moving than it probably would have if it was a straightforward tearjerker about hard living. Of course, Blier can’t be credited completely for this, as his actors are wonderful, especially Anouk Grinberg as Victorine, our perpetually childish heroine, and Marcello Mastroianni as her charming perpetually drunk papa. An under-seen gem. 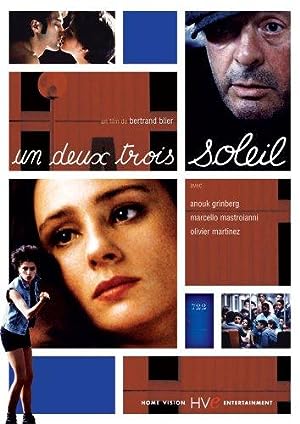 1, 2, 3, Freeze (1993)
104 min|Comedy, Drama|18 Aug 1993
6.5Rating: 6.5 / 10 from 694 users
One, two, three, sun is the story of Victorine (Anouk Grinberg) who grew up in the suburbs of Marseille, stifled by her mother (Myriam Boyer) and caught between the urge to grow up and that…
Director: Bertrand Blier
Creator: Bertrand Blier
Actors: Anouk Grinberg, Myriam Boyer, Olivier Martinez, Jean-Michel Noirey