Like the stolen car he is driving in circles, Chérif’s life is going nowhere in a hurry. When he is arrested for the umpteenth time, Chérif’s exasperated mother strikes a last-chance deal with a judge to send the troubled juvenile to live quietly with his aunt and uncle and attend vocational school. Chérif’s earnest attempt to go straight is sending him directly to the doldrums, until he discovers that his even straighter-laced cousin Thomas is actually part of a local gang of taggers, who roam the night bombing walls and overpasses in the shadow of a mysterious tagger whose death-defying works have made him a legend.

More a chronicle than a real story ,”Vandal” was critically-acclaimed but failed at the box office.It is sure easy to see why:the hip hop culture ,although no longer that of a marginal group,is not really mainstream either.

Chérif ,sent to the east of France by his discouraged mom,has found a straight-laced cousin who is part of a pack of taggers who ,when the night has Fallen,go bombing on the walls of Strasbourg town.These rebellious minds are very competitive and there’s a mysterious tagger who leaves his “artworks” in out-of-the-way places.One night,however,an accident happens.The night scenes ,with these hooded youngsters recalling the “villains ” of the serials of the French silent age ,are not devoid of charm and poetry;we are spared rap music (and music which passes for rock in MTV works),which is a blessing .

The Young director (32) did not try to create his “rebel without a cause” and he avoids the usual clichés .Nevertheless,his depiction of the milieu in which his hero is nurtured is too superficial :his work as a bricklayer’s apprentice ,for instance ,is underwritten ;the mother (and grandma) hardly appear.

The last picture may puzzle the viewer. 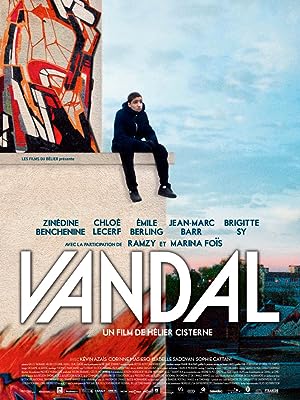