A visual incursion into the troubles psyche of a young boy whose unstable and manipulative mother committed suicide in front of him.

Ivan Noel, wrote and directed this dark tale of Gabriel who is constantly visited by spectral dreams of Sofia (Romina Pinto) his mother. Isolated from his troubled mother, the boy becomes a dark, lonely brooding child (Renzo Sabelli) who witnessed her death. Gregorio, his father (Guillermo Tassara) is a harsh demanding disciplinarian who is pressured by the landlord to vacate the somber premises is unable to find help for his son. Seeking ways to improve the haunted estate which once belonged to a group of Monks, Gregorio invites his sister Debora (Leticia Vota) to help advise the suicide prone boy. Gabriel however is fixated by ghostly apparitions which convince him that his love is being stolen by a girl who insists on being part of his life. The combination of problems and ghostly apparition’s of the Monks, leads Gabriel to despondency and urges him to follow in the maternal requests to join his mother. Following this movie is interesting enough, but Noel the director adds a black melancholy drama to the movie and at times, the audiences is hard pressed to follow into fear and terror. Nevertheless, the film is yet another attempt of matching the book to his talent as frightening entertainment. One has to understand the medium to follow him, but upon succeeding, enjoyment becomes the by-product. Well done. **** 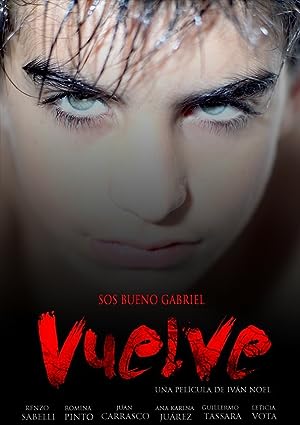 7 reviews for Vuelve 2013 with English Subtitles