We Are The Best 2013 with English Subtitles

In early 80s’ Stockholm, Bobo, an ordinary thirteen-year-old schoolgirl who lives with her divorced mother, takes inspiration from bands like KSMB and Ebba Grön, refusing to accept what others say about Punk being dead. Sharing the same taste in music with her classmate Klara and with the help of the talented but introverted eighth-grader, Hedvig, the girls will decide to put a band together, getting their hands on musical instruments for the very first time. But surprisingly, what started as a joke, will soon become a reality–and with a song already in their hands–this aspiring Punk band fuelled by youthful rebellion, will aim for the stars without any concern about what others say, simply because THEY ARE THE BEST.

‘Punk is dead’ as they say in the film which is set in 1982. Punk fans from 1977 have moved on to Joy Division and young people are dancing in tacky attire to The Human League! Not these three passionate young 13 year old girls Bobo, Clara and Hedvig. They still think punk is very much alive and want to form a band, even though the founding members Bobo and Clara cannot play (They later recruit Hedvig who is a classical guitarist). A simple premise like this makes for one of the most enjoyable films this year so far.

Bobo and Clara are outsiders in their school. Bobo is the shy, androgynous type, whereas Clara is the outspoken type with naïve anti-establishment views. After a minor punishment in gym class for not joining in, they vent their frustrations at the seemingly unnecessary part of the school curriculum by writing a song titled ‘Hate the Sport’. They pretend to be in a band when they are at their local youth club and manage to book a room where there is instruments. Since they cannot play a note between them, they need to recruit someone else. When watching Hedvig play classical guitar to a chorus of boos from the audience at a school concert, they recognise she is an outsider as well. There is discussion over whether Hedvig’s Christian views would be fitting with their image. Clara amusingly thinks of it as a challenge to turn her from Christian into a punk.

The three girls boast the usual mixture of cynicism towards mainstream cultural ideals and a positive enthusiasm for changing the world. The actresses do a stellar job in making the conversations and interaction seem very believable. The film is often very funny and very relatable to anyone who was some kind of passionate outsider as a teenager. The parents of the girls are also well observed. Here we have burned out and embarrassing hippy parents who are sickeningly liberal and a single mum who floats from man to man to suppress her loneliness. They may have at one time been enthusiastic and idealistic in their formative years much like the central characters, but life has made them ‘uncool’! The dialogue seems ad-libbed most of the time and done very well. The scenes are expertly edited so the conversations are not drawn out so much which happens often with improvised dialogue. It also has a social realism aesthetic to it which I feel is needed for a film like this it really encapsulates the energetic, youthful optimism which is also realistic.

After years of apparently making dark art films, Director Lukas Moodysson has made something here which encapsulates the spirit and energy of youth and punk. I feel it is Directed by someone who really understands punk as not just a genre of music, but a passion and attitude which lives in the hearts and minds of, in this case, the dis-enfranchised youth. The fact that it is based on his wife’s comic book in which she writes of her own experiences as a teenager, it seems like a personal project too. I could not stop grinning throughout the whole film as I found it a particularly joyful experience. The film gives way to poignant moments like the scene when Hedvig plays an acoustic version of a song by Swedish punk band KSMB. It was a scene which made me nearly cry and really gave the lyrics a new perspective with the acoustic guitar. It made me want to go home and write a songs expressing my general vitriol towards the bureaucracy of sport, but could not come up with something as good as this. As they say ‘We are the Best!’. And it’s true! 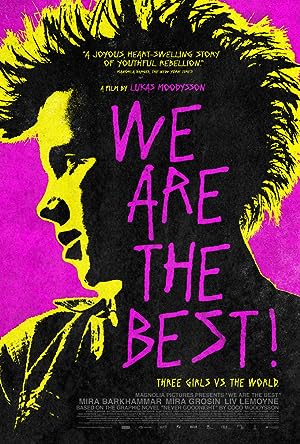 We Are the Best! (2013)
102 min|Drama, Music|20 Jun 2014
7.2Rating: 7.2 / 10 from 9,221 users
Three girls in 1980s Stockholm decide to form a punk band — despite not having any instruments and being told by everyone that punk is dead.
Director: Lukas Moodysson
Creator: Lukas Moodysson, Coco Moodysson (comic book)
Actors: Mira Barkhammar, Mira Grosin, Liv LeMoyne, Johan Liljemark