Who can kill a child 1976 with English Subtitles

A couple of English tourists arrive on an island where all the children have gone crazy and are murdering the adults.

While on vacation, a man and his pregnant wife visit an island that the former knows from his past. They arrive to find that the place is not how he remembered. In fact, it appears to be quite deserted aside from several children. It isn’t too long before they come across an adult. Pity the kids get to him first, killing him and stringing his body up for use as a human piñata. You see, adults are no longer welcome on this island. At least not if they’re still among the living.

For my money, “Who Can Kill a Child?” is a masterpiece of the genre. It makes other killer kid films look like jokes in comparison. Originally seeing it via the “Island of the Damned” cut, it’s a very tense and unsettling film with some interesting socio-political subtext as relates to child violence. The likable main characters really struggle here, both physically and morally, in a picture as bleak as they come. It has such an impeccable mood and atmosphere to it. The closest comparison I can make is to that of Werner Herzog’s short documentary, “La Soufrière”. The isolated, disquieted feel of the island is very predominant.

It’s unfortunate that director Serrador faded into the land of television after this film. He clearly had a lot to offer the genre. 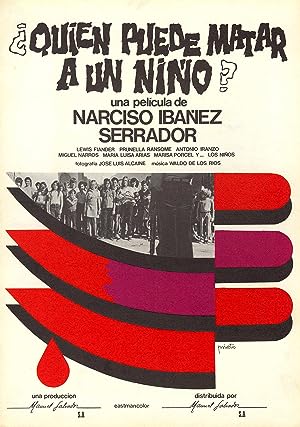