Toni (Fabian Castro) and Emma (Julia Hernandez) are brother and sister who owns a stable farm. Ramon (Richie Ormon) and his son, Aaron (Christian Blanch) works for them. Toni is openly gay who loves to party, Emma has a crush on Aaron who is a closeted gay who is afraid that his father might find out, but his father also has a secret that will lead to murder.

This Spanish LGBT movie is like a cute old-fashioned melodrama, complete with one of those soundtracks that builds up the pitch to exaggerate the tension in this drama with a brother and sister both fighting to win the heart (and body ) of the hot farm hand that works on the horse ranch they own.

The story starts to unfold at the local Police Station when the siblings Toni (Fabián Castro) and Emma (Júlia Hernández) are being questioned for the sudden disappearance of Aaron (Christian Blanch) the object of their affection, who the Police suspect may have been murdered. Also with them is Aaron’s father Ramon (Christian Blanch) their foreman who had always given his son a hard time if he ever suspected he was having fun.

Then the movie reverts back to the months before leading up to this moment. Emma had been all but throwing herself at Aaron who as the strong silent type was a hard one to read, and when she did eventually make her move, he rejected her and she rushed off in tears. Meanwhile Toni who was openly gay and working his way through a seemingly endless supply of local men, was barely aware of Aaron’s existence let alone even catch on to the fact that the ranch hand was carrying a torch for him. It wasn’t the fact that he caught sight of the naked well-endowed Aaron in the shower that changed his mind, but it certainly was a big factor.

Meanwhile Ramon, who it turned out had a big secret that he was keeping from everyone, encouraged Aaron to pursue Emma whilst warning him to keep away from Toni. His son ignored both of these instructions infuriating his father, and distressing Emma, but giving a Toni a night that he would never forget in a hurry.

There is a twist to the story just when you think it has got totally predictable, and the fact that first-time director Joan Fermí Martí throws a few scenes with Toni’s bare-chested handsome friends riding bareback (the horses that is) keeps you fully engaged anyway. Newcomer Blanch makes his own impact in this his first movie role, but then again, he had good training for it as he was once a popular participant in a TV Dating Show. The only part of this engaging easy-on-the-eye drama that doesn’t work is the the fact that some of the story is told through the eyes of a drag queen friend of the siblings which is annoying to say the least. 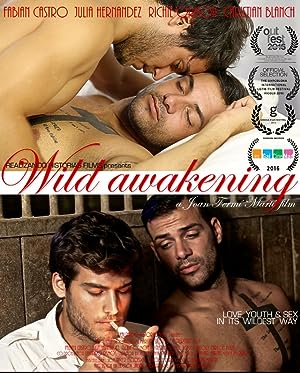