Follows four friends in their quest to form a punk band. As workers protests sweep across the country, Janek and Staszek, the sons of a navy man, the rebellious Kazik, and the affluent Diabel gel as a band, but their disparate lives are touched by social turmoil and outside perceptions.

Adolescent love and politics may not seem to mix, but it does in this brilliant film that uses as a background the Gdansk shipyard strike. Revolt is everywhere, in young people seeking refuge in Rock music, in individuals seeking freedom from the dire economic conditions facing Poland in the 1980’s. Yet, it is also a film about love of country, love of family, and love, plain and simple, even if discord seems to reign everywhere. It is from this discord that Borcuch manages to crank up the film’s suspense and tie together episodes that on the surface seem disparate. Each one of them meshes into the other to form a canvas that speaks of life’s triumph over calamity. For instance, Janek’s discovery of love, of the self, of the other, and its imminent loss fostered by divergent political views is more than a mirror to Janek’s father encounter with death and sorrow, or to Poland’s political woes. This film is at once Bergmanesque because of its depth,and Nouvelle Vague because of the way it maintains youth’s focus on life. Kudos well deserved. 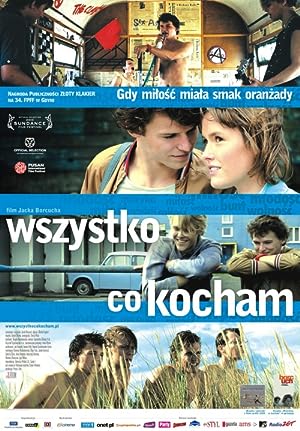 All That I Love (2009)
95 min|Comedy, Drama, Music|15 Jan 2010
6.9Rating: 6.9 / 10 from 1,448 users
Follows four friends in their quest to form a punk band. As workers protests sweep across the country, Janek and Staszek, the sons of a navy man, the rebellious Kazik, and the affluent …
Director: Jacek Borcuch
Creator: Jacek Borcuch
Actors: Mateusz Kosciukiewicz, Olga Frycz, Jakub Gierszal, Andrzej Chyra