Strangers in their own birthplace, 16-year-old Danny and 18-year-old Odysseus cross the entire country in search of their Greek father, after their Albanian mother passes away. Determined to force him to acknowledge paternity, little do they know that the road to the much-coveted Greek citizenship is paved with ghosts from the past, adult savagery and a dream that needs to come true, no matter what. Reaching the end of this initiatory journey they eventually come of age even if Greece refuses to follow.

this may contain spoiler

Greece has received great number of refugees and immigrants the last decades and that resulted in a huge reformation of its socio geographical landscape. The first wave of immigrants, in the early 90’s, came from the neighboring Albania right after the fall of Hodja’s regime. They are the largest ethnic group of immigrants in Greece up to today, while many of their children have been born in Greece but they are refused of citizenship rights, according to an anachronistic law that, hopefully, will be amended.

That situation is exactly what the movie is about. Two youngsters, of Albanian mother and a vaguely known Greek father, after the death of their mother put themselves in the search of the father, in order to get his testimony and obtain the long cherished Greek citizenship.There starts a juvenile road movie from the Greek capital towards the northern Thessaloniki, portraying scenes of the countryside as nature and human landscape, denoting the unbreakable bond between the two brothers, their struggle to survive in a not always welcoming society and their eagerness to change their fate.

The movie treats the delicate issue of the immigrants adaptation in the Greek society, which has corresponded in a controversial way. There were other Greek movies with similar theme, such as To kanarini Podilato (The Canary-color Bicycle) and O Dromos gia ti Disi (The Way to the West) but what differentiates this one is his hilarious attitude and optimism, which made it a teenage hit in Greece. People move on in their lives facing their realities and accepting their particularities without losing their innocence. As one of the protagonists says: ‘ We have no home, that means that all the world is our home.’

Thus cosmopolitanism, anti racism, anti-homophobic, two heartwarming young protagonists that call you to partake, a vivid scenario without clichés and full of surprises consist what could be an emblematic film for Greece in the 2010’s 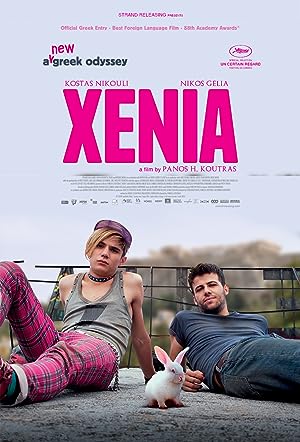