In a small coastal town of fishermen in Uruguay, the biologist Kraken works and lives in a house at the sea side with his wife Suli and their aggressive fifteen year-old daughter Alex. When Suli welcomes her former best friend Erika that comes with her husband, the surgeon Ramiro and their teenage son Alvaro to spend a couple of days with her family, Kraken learns that his wife invited Ramiro to operate Alex. Meanwhile Alex and Alvaro feel attracted by each other; however, Alvaro finds that Alex is hermaphrodite and she finds that Alvaro is gay. But the troubled and outcast Alex has the right to choose what gender she wants for her.

Hermaphrodites or intersexuals,as they are called today – imho a slightly pejorative expression – are a rare theme in contemporary art; I can only think of Euginides book “Middlesex”. The more it is surprising,that “XXY” comes from Argentine, a country not especially prominent in modern gender discourses. But Luisa Puenza impresses in her first feature film with a sensibility and open-mindedness,which will last in the memory for a long time.Puberty is always a difficult state between two identities: Not longer a child and not yet an adult.For the main protagonist Alex that problem doubles,because for her there is also the question of her future sexual identity.Society demands a clear decision.Like the language,which cannot find an expression for his/her existence – the adults alternately speak of “her” or “him” -, so the medicine aims at subjecting everyone to its sexual bipolarity. With witty dialogs and panache the film proclaims the right of being different and of searching one’s own sexual niche. But luckily it’s far from being dogmatic or didactic.It also understands the position of the parents to give their child a kind of shelter and save it from the confrontation with society.What the film openly criticizes are the operations, or should I better say amputations shortly after birth. The acting is generally fine, especially by Efron(“Glue”) and Darin.The missing star is the result of little flaws: In some places it too symbolically conceived: It takes place at the coast,which combines land and water; the father working as a marine biologist for sea turtles,whose sex cannot be defined from outside.Such clear hints wouldn’t have been necessary. Luckily in our modern advanced society it is for an individual easier possible to define its own “normality” and fight for it, though it will be a lifelong fight.The film shows that in a way encouraging the viewers. 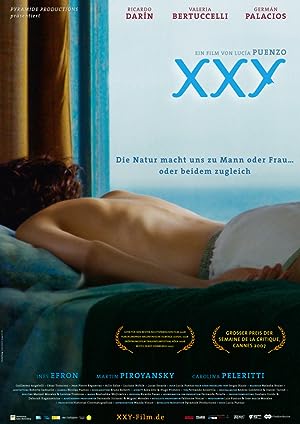 XXY (2007)
86 min|Drama, Romance|02 May 2008
7.1Rating: 7.1 / 10 from 12,190 users
The story of an intersexual fifteen-year-old. She lives with her parents, who have to cope with the challenges of her medical condition.
Director: Lucía Puenzo
Creator: Lucía Puenzo (screenplay), Sergio Bizzio (short story "Cinismo")
Actors: Ricardo Darín, Valeria Bertuccelli, Germán Palacios, Carolina Pelleritti