First feature film directed by Alex Anwandter. You’ll never be alone tells the story of Juan, a withdrawn manager at a mannequin factory who after his teenage gay son suffers a violent attack, struggles between paying his son’s exorbitant medical bills and his last attempt at becoming partners with his boss. As he runs into dead-ends and unexpected betrayals, he’ll discover the world he knew was already waiting to be violent with him too.

How can you love a film that will split opinion with its challenging conclusion?

Broken bodies, broken minds, broken dreams, broken systems and broken hearts…all play out against the backdrop of Chile’s doing great – for some, not all.

This is the definition of a hate crime…the violence is unbearable. The violence is wrought by the familiar…by neighbors, by a lover!

The aftermath concentrates on the other victim…the father of the beaten. His slow and excruciating disintegration into desolation. A decent man who hits a brick wall [face-on] with every turn he takes. There is no respite from [t]his despair.

Alex Anwandter has created a soundscape rather than a landscape for this story…he demands much from his audience (some would argue, too much). There are mighty metaphors, scathing injustices and muted messages…but, the final nail in the coffin is the lack of a [tangible & comforting] resolution. This – indeed – is nomansland.

Refer to the title for closure…instead of saying ‘WTF’ at the ending…think long and hard about it!

A mesmerising, polarising, traumatic debut…a mighty achievement for a runtime of just 80 minutes! 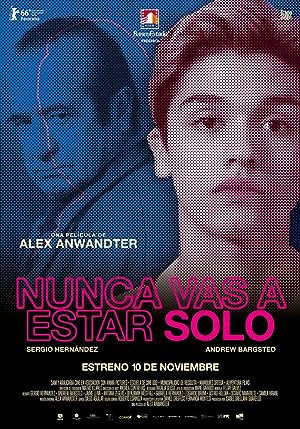 You'll Never Be Alone (2016)
81 min|Action, Drama|10 Nov 2016
6.2Rating: 6.2 / 10 from 321 users
When his cross-dressing teenage son suffers a brutally violent attack, a mannequin-factory manager desperately seeks help and, when none can be found, is forced to take matters into his own hands. Based on a true story.
Director: Alex Anwandter
Creator: Alex Anwandter
Actors: Sergio Hernández, Andrew Bargsted, Jaime Leiva, Roberto Cayuqueo