Set in a near future when water has become the most precious and dwindling resource on the planet, one that dictates everything from the macro of political policy to the detailed micro of interpersonal family and romantic relationships. The land has withered into something wretched. The dust has settled on a lonely, barren planet. The hardened survivors of the loss of Earth’s precious resources scrape and struggle. Ernest Holm (Michael Shannon) lives on this harsh frontier with his children, Jerome ( Kodi Smit-McPhee) and Mary (Elle Fanning) fends his farm from bandits, works the supply routes, and hopes to rejuvenate the soil. But Mary’s boyfriend, Flem Lever (Nicholas Hoult), has grander designs. He wants Ernest’s land for himself, and will go to any length to get it. From writer/director Jake Paltrow comes a futuristic western, told in three chapters, which inventively layers Greek tragedy over an ethereal narrative that’s steeped deeply in the values of the American West.

Let’s get this right of the bat: This is a low budget movie and it is draining the viewer (slow paced). But just because you have some recognizable faces, do not expect this to be “Hollywood” (as one other reviewer did). And do not even think about comparing this to Tarantino. If that’s what you expect/your whole extension of movie knowledge, do not read any further, but especially: do not watch this movie at all. You’ll be doing yourself a favor mostly.

Back to the actors, who are giving extraordinary performances. No matter the age of the ones involved, we do get amazing on our screen. While to some it might seem there is no story, that is not true. It’s just hidden well behind all that character driven development we’re seeing. It’s not a fun ride, but it’s a well made one! 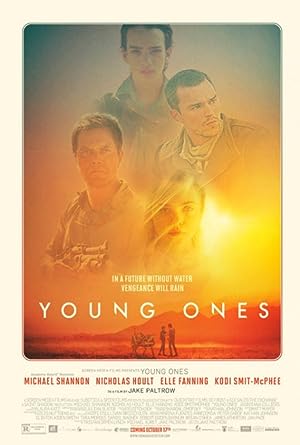 Be the first to review “Young Ones 2014” Cancel reply