At a boarding school in the pre-war Austro-Hungarian Empire, a pair of students torture one of their fellow classmates, Basini, who has been caught stealing money from one of the two. The two decide that rather than turn Basini in to the school authorities, they will punish him themselves and proceed to torture, degrade, and humiliate the boy, with ever-increasing sadistic delight. As each day passes, the two boys are able to justify harsher treatment than previously given. Torless is a passive member of the group but observes rather than participates and frustrates the tormentors by dryly analyzing their behavior.

What’s interesting about this film is the way it unapologetically removes the true and original gay content from the story. Torless has a passionate gay affair in the original. In the film gayness is alluded too as perhaps a contributing factor to the corruption of innocents via the pursuit & discovery of knowledge & experience. As a gay person with a broad understanding of the systematic exclusion and removal of gay people from history, the main theme of the film, re: the brutality , sadism and masochism & manifestation of fascism is somehow deeply compromised by the idea that it is excusable, if not absolutely impossible to reveal Torless’s gay self as a positive and actual fact of his boyhood because it would offend European bourgeoisie taste of the 60s. So the sensationalism of fascism is portrayed and the recent anti-Semitic WW11 history of Austria ‘allowed’ as an allusion to it’s part in Nazi history, but homosexuality is still being demonised and censored in a film which purports to be about anti-fascism. I don’t buy that – and we’ve all been robbed of the true story – where Torless , far from being a dried up , cold ‘acceptably’ moral and suggestively straight prude, in the real story embraces the presence of gay feelings rampant in the original story and which contribute to the whole process of his crisis about morality which the film hijacks to portray a censored and acceptable message of it’s own. 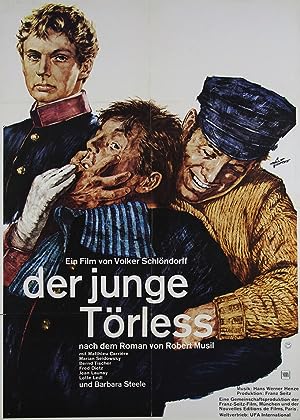