The first Russian emo-movie, Closed Spaces is a story about the newest generation of Russians. Having grown up in Russia’s crazy 1990s, an era filled with constant and drastic change, these teenagers have no solid ground beneath their feet. They are trapped in a strange world in which their money-obsessed parents lead senseless lives and even kill each other. Vika is twenty years old. She has black fingernail polish, wears pink dresses, and is constantly depressed. While working at a pizza place, she gets an order for a pizza delivery from Venya, a strange twenty year old boy who lives all alone in a deserted apartment in the middle of Moscow. Venya suffers from agarophobia, the fear of open space. When Vika arrives Venya lets her in and locks the door behind her. The story begins. 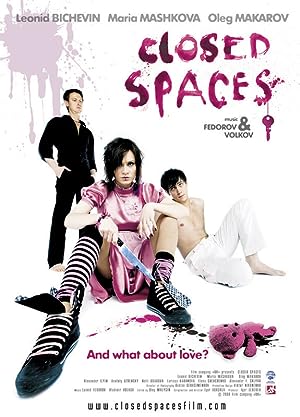