Early 1990s. With AIDS having already claimed countless lives for nearly ten years, Act up-Paris activists multiply actions to fight general indifference. Nathan, a newcomer to the group, has his world shaken up by Sean, a radical militant, who throws his last bits of strength into the struggle.

‘120 Battements par minute’ is about the protest movement Act Up Paris, which tried to put aids on the map as a major problem. The film is set about thirty years ago, when there was no efficient treatment yet against aids. There is at least one other film about this era and about this theme: ‘Dallas Buyers Club’. Both films show how desperate aids patients were to get their hands on promising new medication. Both films show what the disease can do to a human being. Both films show the ignorance and prejudice of that period.

The American film is a clever, well-made and well-written film in which the development of the lead character is central. But the French movie is slow-moving, lacks any suspense and doesn’t seem to have any central focal point.

It starts by showing, in excruciating length, the weekly meetings of the Act Up members, who more often than not embark on endless discussions about something as mundane as the slogan for a campaign poster. They also try to disturb official meetings, and invade a pharmaceutical company which refuses to release the test results of a certain kind of drug.

This last story element offers some dramatic possibilities, but the film makers don’t elaborate on it. This becomes clear when, in one scene, the managers of the pharmaceutical company are invited to explain their policy to the Act Up members. Instead of showing this exchange of differing opinions, and thus creating some much-needed dramatic development, the story moves away from the pharmaceutical company to the experiences of one individual Act Up member. Suddenly, he becomes the protagonist, and we see him struggling with the disease.

Throughout the whole film, I kept on thinking: what’s the point? Where is this story heading? Why is the first half of the film about a group of people fighting for a cause, and the second half about one individual fighting against a disease? The problem is also that the urgency is gone. Most of the things Act Up is angry about, are solved now. Very few people in the western world die of aids anymore, and everyone is aware of what the risk factors are. The makers of ‘Dallas Buyers Club’ knew this. That film was not so much about aids, it was about how one particular man handled aids. In ‘120 Battements par minute’, the disease is still very much the lead character. 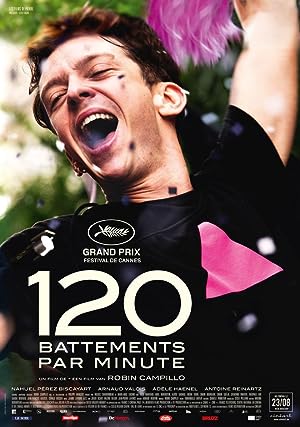