Felix is a friendless achiever in high school whose life changes after the arrival of the half-American Snyder brothers, entangling him in their dark ambitions.

2 Cool 2 Be 4gotten is a coming of age movie set in Pampanga, following the life of a surly teenager named Felix, whose dreary existence is shaken to its core when Fil-Am siblings Magnus and Maximillian started going to his school.

Now when you’ve seen one too many of the current local shows, you can’t help but think you’ve already seen it all: switched at birth, rags to riches, love triangles, kidnapping, amnesia, etc. What this movie reminded me of is that there are still a lot of stories out there to tell. Like, what was it like in Pampanga during Mt. Pinatubo’s explosion in 1991 (that right there is another movie in itself)? While Felix was sharing how they lost everything due to the lahar, there I was reminiscing of that day when I went out of the house to find the whole stretch of our street covered in ashes. I was in awe for I’ve never seen anything like it before and played like any kid would thinking it was snow. That to me is what good storytelling is all about, it moves you, it makes you feel, it makes you reminisce, it makes you feel alive.

Another thing it has going for it is it’s cinematography. Carlos Mauricio successfully turned your run-of-the-mill Pampanga locations into lush and dreamy settings worthy of it’s Best Cinematography accolade in the 12th Cinema One Originals Film Festival. You can appreciate the little details that some of the scenes have which gives you the impression that the filmmakers really put their effort in making this film. This is something they passionately cared for and it shows in the end result.

Performances were good all around. Khalil Ramos was captivating as the overachieving student with a twist – he knows he’s better than everyone else in his school but his family’s financial situation is what’s keeping him from attaining more than what he’s capable of. Ethan Salvador and Jameson Blake also delivered, which I appreciated more after I read they were picked after 2 rounds of audition and the roles weren’t just handed out to them.

If you’ve seen and enjoyed ‘The Virgin Suicides’ by Sofia Coppola starring Kirsten Dunst, you will get the same feelings for this movie. Also for some reason after watching I had the sudden urge to listen to Troye Sivan’s ‘Blue Neigborhood’ album. Quoting another review, if the movie can be translated into music, that right there is what it would sound like: “a small masterpiece.” 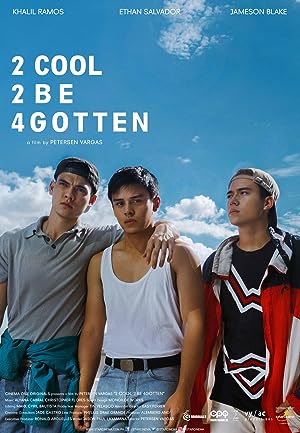