The story of three women who explore love and freedom in Southern California during the late 1970s.

THIS FILM IS RECOMMENDED.

IN BRIEF: This story of female empowerment boasts strong acting and fine dialog, even if its plot gets lost in the 70’s.

SYNOPSIS: Three women bond together to guide a teenager in the late 70’s.

JIM’S REVIEW: Mike Mills wrote and directed 20th Century Women, a coming of age drama about a older single mother trying to raise her 15 year-old son in 1979 California with a little help of some friends. A interesting enough premise and the end result is an insightful tale that has much to say but is unable to sort out its message concisely.

This is due to some gimmicky directorial choices by Mr. Mills which only widen the generational gap of the characters and period details. He overuses archival footage, voice-over narration, recognizable pop music, and timely references in order to fill in exposition about the times. But in doing so, he undercuts the dramatic tension of his plot and story. His pacing is too leisurely edited and the characters’ action take a while to coagulate and interact. However, the words from his script are eloquent and quite effective as he creates vibrant characters worthy of your attention.

Mr. Mills also assembles a lively cast of actors that elevate the material. Annette Bening’s understated performance as the independently minded Dorothea, a former 60’s free spirit, is terrific. She shows the strength, frustration, and wit of a woman coming to terms with her teenage son’s formative years. Playing her son, Jamie, is Lucas Kade Zumann, a talented young actor who is so natural and convincing in his role.

Adding strong support are Greta Gerwig as Abbie, an advocate of 80’s punk rock chic dealing with personal issues, Elle Fanning as Jamie’s love interest and sexually confused girlfriend, and Billy Crudup as Dorothea’s boarder handyman, a screwed-up product of the 70’s himself.

20th Century Women time travels and sifts through the years while its characters deal with various trends and historic events. The film celebrates female ingenuity and empowerment with its wonderful dialog and an engrossing story, even if there are some missteps on their journey to self discovery. 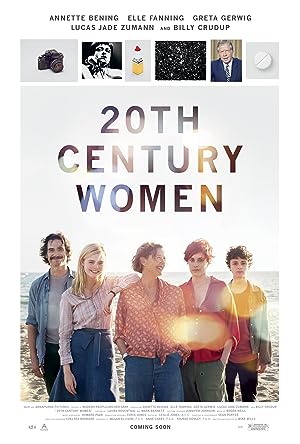