300 Miles To Heaven 1989 with English Subtitles

Based on a true story dating back to 1985 when two Polish boys, a teenager and his little brother, escaped from communist Poland all the way to Sweden, hidden under a truck. In the movie, their destination has been changed to Denmark.

“300 mil do nieba” tells the story of two brothers and a friend of the oldest, who decide to take their chances and try to get out of Poland any way possible. We end up having a sad little movie, that shows the terrible situation of the poor and oppressed.

The story is simple enough and basically follows the grueling journey of the two brothers since the moment they decide to go on the run together. Their family is poor, their father, a teacher, lost his job because he didn’t obey the orders from above about how history should be taught, they also have two younger twins… They are being strangled economically and psychologically, and in their imagination, they see the United States as the dream land.

The movie is bleak. Not terribly, but it keeps dark, dirty and angry throughout the whole running time. The direction is simple but effective, and the acting, even if the children are not great, is acceptable enough that it doesn’t become a negative. The music is beautiful and brings the story to life without making it very cheesy. However, there are some down points, like some breaks of pace that don’t make much sense, and some jarring moments when the story jumps from one point to the other too much in a hurry.

Good movie, but it could have been better. 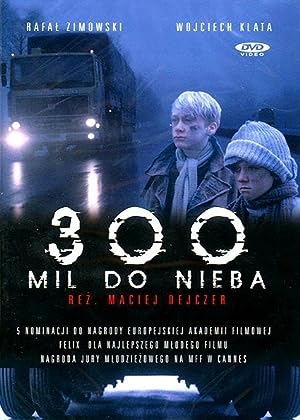 300 Miles to Heaven (1989)
90 min|Biography, Drama|30 Oct 1989
7.3Rating: 7.3 / 10 from 611 users
Based on a true story dating back to 1985 when two Polish boys, a teenager and his little brother, escaped from communist Poland all the way to Sweden, hidden under a truck. In the movie, their destination has been changed to Denmark.
Director: Maciej Dejczer
Creator: Cezary Harasimowicz
Actors: Wojciech Klata, Rafal Zimowski, Kama Kowalewska, Jadwiga Jankowska-Cieslak