A Frozen Flower 2008 with English Subtitles

The King (Joo Jin-mo) of Goryeo is married to a Yuan Dynasty princess (Song Ji-hyo), but they do not have any children. There is constant pressure on the king both from the Yuan emperor and his own counselors to produce a crown prince and ensure the continuity of the royal dynasty. The king’s palace guard is composed of thirty six young soldiers, led by military commander Hong-rim (Jo In-sung), who is also the king’s lover. The king finally decides to charge him with a strange commission: copulate the queen and beget a child. Hong-rim and the queen are uncomfortable accepting the royal order first, but they finally comply. However, their relationship does not stop at procreation, but genuinely true and intense romance soon blossoms between the two, and in this strong and close intimate relationship there is no place for the king.

A Frozen Flower got billed here as “The Year’s Sexiest Blockbuster”, and writer-director Ha Yu’s movie could probably be also billed as an equivalent to Zhang Yimou’s Curse of the Golden Flower, given its period setting and schemes within a royal household, plenty of gorgeous costumes, opulent production sets, with a tinge of wire-fu martial arts and a chock load of mixed romances thrown in for good measure too.

Set in the Korean Koryo era where it’s under the control of the Mongol’s Yuan Dynasty, the current gay Koryo King (Joo Jin Mo) sets up his own elite bodyguard troops, recruiting 36 young boys to undergo extreme training and eliciting pledges of unfettered loyalty from this group of trusted men. Amongst all he favours Hong Lim (Jo In Sung), and spent plenty of personal and quality time with his pet, from the open plains hunting to the courtyards training, right down to the games both play in the royal bedroom. Nepotism runs in the royal household, since it’s an open secret as to why the King appoints Lim as chief of his bodyguards, undoubtedly also because of the advantage of up close and personal already from within the royal chambers.

The male-centric world soon got shaken by the introduction of the Yuan princess to be Queen (Song Ji Hyo) in an alliance forged by marriage, and I guess you can see how this third party could cause severe problems. Pressure mounts when the royal family is expected to bear an heir, otherwise a successor to the throne will be appointed. This displeases the King of course, given someone on the outside waiting in the wings for his demise, but then his sexual preference also meant that he can’t get it up. So in desperation, he crafts a crazy plan in over to hang onto power, and that’s to order his lover Hong, to impregnate the Queen and produce an heir whom he will accept as his own, thereby protecting his throne. The Queen reluctantly agrees of course, but as a woman who accepted to be loyal to the kingdom, she’s got to do what is best for her husband. As for Hong, well, it’s duty toward both King and Country.

What this does is in fact to push both the Queen and Hong into an uncontrollable sexual awakening, which the rest of the film pretty much centres upon, dealing in relationships, and the vast emotions that come along with it, including the negative ones like jealously and ultimately, rage and hatred. While at first Hong couldn’t get himself to betray his first love, I guess it probably is easier for any guy to treat sex as sex without an emotional baggage, though it did tickle Hong’s heart that perhaps the female of the species was more interesting, and his breakaway from a male-centric relationship, was seen as a betrayal and treason to the King.

As for the Queen, the power of fleshly pleasures from this perverse consummation of a marriage, sees to it that she gains some strength in taking over some control in her restricted life, and plots to seduce Hong even more so that she could satisfy her lust, which for both parties, transform into a healthy heterosexual relationship in which the King obviously despises. I suspect there will be some quarters cheering the film in depicting that homosexuality can be cured by a good dose of sex to open their minds, but I thought it was more of a matter of choice and opportunity being presented here, since the sexual preference get contrasted between Hong and the King’s is quite clear – one’s obviously following the heart, the other his orders, which slowly developed into silent insubordination, before the heart fully takes over. In any case this romantic triangle will push and probe when you’re viewing this, as there are plenty of insights to gain from if you were to put yourself into the shoes of either party, and determine how you would react to the sequence of lustful events.

The film of course goes beyond love and lust issues, although Hong and the Queen go at each other like jackrabbits. There’s also a subplot involving the usual political intrigue (having the film set in a period setting and not dwelling on this seems wasted), with political assassinations bringing about some major set action sequences. I felt it would have probably benefited audiences with no clue about the Yuan dynasty control over Korea at the time if this was given a little more focus, but I suppose it’s left to further reading on our own. Or had a bit more about the bodyguard unit because they were being utilized for a lot more activities like counter-espionage rather than just plain protection purposes.

This being Singapore, you’ll get to see the more explicit heterosexual scenes between the bisexual and the straight woman quite intact, though the only (at least the only one that made it) homosexual one was butchered for the most parts. Those who prefer their films intact could go opt for the DVD instead, as the Koreans have already released this, which includes a limited, unrated 2-disc edition. 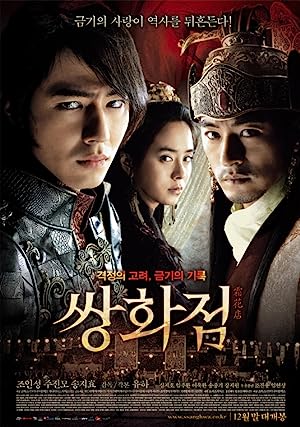