A Letter of Fire 2005 with English Subtitles

The 12-year-old son of a Magistrate is accused of murder, after having mistook a prostitute for a mugger while hiding in an abandoned building and fearing for his life. His parents hide him from the authorities, amid themes of incest.

Dear Asoka, First of all let me apologize for addressing you by your first name. I am well aware of the fact that in a polite society a person doesn’t address someone else by their name unless that person is being asked to. You are neither a friend nor a colleague of mine, a status which wouldn’t permit me to call you such. But In my own self-righteous mindset, I found an excuse to justify myself for calling you Asoka. That’s purely because I am an avid fan of your work. Ever since I had the opportunity to watch “Dunhinda Addara” and “Diyakata Pahana”, I became an instant admirer of your authenticity which you demonstrated on those Tele Dramas with immense steadfastness. I wish I could say the same thing about your initial work “Prabathaya”, but that didn’t impress me that much. It was nothing out of ordinary. But the previous titles mentioned were revelations for Sri Lankan audience and despite the mixed reception and criticism received as a whole, I believe it has won the hearts of many viewers and specially a couple of people I knew closely, who were fortunately blessed with good senses to creative forms of art and to identify and appreciate once they experience them. Your work also gave me the impression that you might be a maverick in your field of work. Since then I was keenly observant about your future work. I was looking forward to see an honest, creative, passionate, fearless filmmaker/writer working at his best. Unfortunately I missed out on watching couple of your movies, which are “Chanda Kinnari” and” Thani Thatuwen Piyambanna”. But I had the opportunity to watch “Me Mage Sandai” and I was very much impressed with that. That’s when I started to appreciate your nerve to swim upstream in a society where majority of people suffer from socio psychological fabrication. We still live in a society, like medieval times and the following period of enlightenment haven’t reached us yet, so we could generate our own opinions rather than blindly following what are being told by societies’ cultural, political and religious leaders. That is a very regrettable state, but we are left with no choice, so it’s better to continues with the path we have chosen, which you as an artist rightfully does. But speaking of “Thani Tatuwen Piyambanna”, even though I haven’t seen the movie, I became aware of the story line. I have to tell you that I have also seen “Boys Don’t Cry” by Kimberly Pierce, a true story about a girl name Brandon Teena who grew up in state of Nebraska and finally got brutally murdered. Please do not even fathom the fact that I am trying to call you a counterfeiter or in plain slang a rip off. . No absolutely not; I was proud of you as a Sri Lankan when you made that movie and stood by your creation. Similar story lines can happen all around the world. And even if it is a remake by any chance, as long as the movie itself is done with great ingenuity, it deserves the same respect just as the original version. When Sergio Leone made all those spaghetti westerns, remakes of Kurosawa’s Samurai movies, starring Clint Eastwood, the different between him and Toshiro Mifune was the Winchester gun instead of samurai sword. Akira Kurosawa’s, great samurai movies were remade in western in a different cultural set up , but the end result was a series of good movies not far from the greatness of Kurosawa’s work. And Kurosawa has often mentioned how he was inspired by John Ford and his movie hero John Wayne. That is what inspired him to create the movies he made in his kind. He went to greater extent not just to appreciate John Ford as a filmmaker but to impersonate him by dressing just like him while he was on movie set. Among the other Japanese technical staff working on his movie, Kurosawa was distinguished not just because of his height which was unusual for an average Japanese native, but for his outfit as well. The point I was trying to make with the above references was, that inspiration can travel across the globe, transfer to continents and people with the capacity to recreate good forms of art by upholding or even may be surpassing the original should be highly appreciated. And regarding “Thani Thatuwen Piyambanna”, all I could say is bravo to you for your efforts for making a movie which followed serious fallout and having the courage to face dreadful consequences. I am still looking forward to watch it whenever I get an opportunity. And yet again I applaud and support your audacity for creating a cinematic piece of unconventional nature. 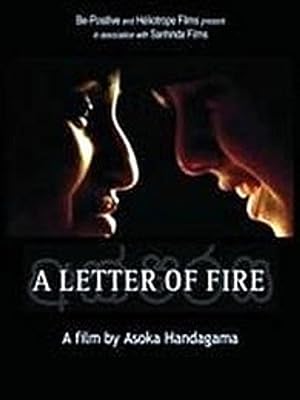 A Letter of Fire (2005)
136 min|Crime, Drama, Thriller|01 Sep 2005
5.5Rating: 5.5 / 10 from 148 users
The 12-year-old son of a Magistrate is accused of murder, after having mistook a prostitute for a mugger while hiding in an abandoned building and fearing for his life. His parents hide him from the authorities, amid themes of incest.
Director: Asoka Handagama
Creator: Asoka Handagama
Actors: Piyumi Samaraweera, Ravindra Randeniya, Saumya Liyanage, Jayani Senanayake

1 review for A Letter of Fire 2005 with English Subtitles