It is small town America in the 1950’s. Twelve year-old Angelo Villano has one dream: to someday sing like his idol, Mario Lanza. His grandmother, Mama Theresa encourages him; and his beautiful voice catches the attention of the formidable but kind Father Walsh who arranges for him to receive formal training. This infuriates Angelo’s widowed father, Frank, who wants his son to be a steelworker like him. Determined to “make a man out of him”, Frank forbids Angelo from singing. When Angelo is chased by bullies into the path of an oncoming car, he recovers all but his voice, retreating into a silent world that no one can touch. One night, locked in the church basement, the frightened Angelo experiences a spectacular vision, a true Christmas miracle, that changes his life. And when his vision and his voice return during Christmas Eve Mass, no one can deny the beauty and blessing of his amazing gift.

It fun to see how bad films can get and this one is big Christmas Fruitcake. If you are looking for a great “Christmas Movie” to see then keep looking. In this film it has a hidden “homophobia content to it”.

This has Donald O’Connor in minor role and that was disapointing. He was the reason why I wanted to see this to begin with 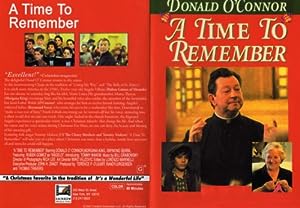