Adam and Eve 1983 with English Subtitles

God casts Adam and Eve out of the Garden of Eden because Eve decided to eat a forbidden apple that a talking snake told her to eat. The disgraced couple find themselves battling a coterie of various creatures.

There are no carnivores in Eden, and Adam’s (Mark Gregory) first son may very well have really been the offspring of Handsome Bearkiller (Angel Alcazar), a brief extramarital partner enjoyed by Eve (Andrea Goldman) during the pair’s estrangement. Never having seen fighting or killing, the two are totally unprepared to defend themselves after being cast from Eden, and equally astonished to see animals and men feeding off each other. They make their first clothing not from leaves, but from a pterodactyl’s wings, the first creature to attack them and the first creature they had to kill. These are some of the interesting “facts” depicted by this imaginative take on the first book of Genesis. It’s not as silly as it sounds, the acting and action are really quite good and the different twists to the familiar tale will hold viewer interest while still retaining the Biblical link. The aforementioned Cro-Magnon warrior bearkiller (Angel Alcazar) really steals the show with his valiant ferocity and desire to appropriate the rather helpless Eve from her wimpy inept Adam. 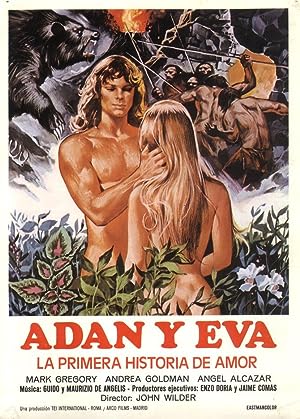