Simon, a Toronto high school student, has been raised by his maternal Uncle Tom since Simon’s parents, Rachel and Sami, died in a car accident eight years ago. Tom, a tow truck driver, decided to move to the city into Rachel’s house and assume the mortgage, something he could ill afford, largely not to disrupt Simon’s life, but equally to get away from his and Rachel’s father, Morris, an openly bigoted man. That upbringing has made Tom a sullen and angry man. Morris only recently passed away. Rachel and Sami met when she, a violinist, brought her instrument in to be serviced, Sami the repairman. Simon now owns his mother’s expensive violin, which Tom would like to sell to help pay the mortgage and Simon’s imminent university tuition. One day at school, Simon’s French teacher Sabine reads a French newspaper story from several years ago as a translation exercise for the class, the story about a pregnant woman traveling to Israel, her then boyfriend who, unknown to her, planted a bomb in her luggage intended to blow up while the airplane was in flight, meaning that if it was not caught before departure, which it was, it would have killed her and their unborn child. Because Simon interestingly translates the story from the perspective of him being that unborn child now a teenager, Sabine, who is also the school’s drama teacher, asks Simon to flesh out the story as a play, either in French or English. Simon begins to pedal the story widely as his reality, in other words that the woman in question truly was his mother Rachel and the bomber truly was who ended up being his Palestinian father, Sami, which may or may not in fact be true. Simon, Sabine and Tom all have to make decisions surrounding this issue, which they do to help their individual self deal with his or her own reality of the situation.

Atom Egoyan, an Armenian born in Cairo in 1960 and living and working in Canada, is a unique voice among contemporary filmmakers. His films rarely follow a linear structure, electing instead to rely on flashbacks and flash forwards to alert the viewer to respond emotionally to the fragments of story provided – those fragments emphasizing his obsession with alienation and isolation, the by-products of a society homogenized by technology, bureaucracy, and mob rule. His films have collected a wide audience of viewers who prefer to be intellectually challenged rather than be ‘entertained’: ‘Next of Kin’, ‘Speaking Parts’, ‘The Adjuster’, ‘The Sweet Hereafter’, ‘Felicia’s Journey’, ‘Ararat’, ‘Where the Truth Lies’, ‘Chloe’, and this little masterpiece, ‘ADORATION’.

Young Simon (Devon Bostick) is enthralled with the Internet and creating videos to place on the Internet. His parents died in an automobile accident years ago and he has been raised by his uncle Tom (Scott Speedman), a angry young man who has never married and whose only other family member living is his father Nick (Thomas Hauff) for whom he has little affection. Simon tends to his ill grandfather, videotapes him telling stories about his daughter, Simon’s mother Rachel (Rachel Blanchard), swearing that Simon’s father Sami (Noam Jenkins) intentionally caused the fatal accident, not unlike a terrorist action. At school Simon takes French from teacher Sabine (Arsinée Khanjian) who encourages Simon’s penchant for drama by encouraging a story Simon has created: he postulates that Sami placed explosives in Rachel’s bag while pregnant Rachel flew to Israel with the intention of exploding the airplane killing 400 people. Simon takes his developing tale to the Internet chat rooms where the story then leaks out to the parents of the teenagers chatting. The ‘news’ results in Sabine being fired from her job. Sabine visits Simon and Tom’s house disguised by an elegant burka, and encounters the angry Tom who had already had a previous encounter with Sabine over a towed car. The intensity of the make-believe story of Sami being a terrorist creates havoc in the town, between Tom and Simon, and with Simon’s relationship to his grandfather. There is a surprise twist to the true background of Simon’s parents, Sabine, Tom, and the grandfather and Simon’s fictional ‘play’ opens doors of emotional reaction from Simon’s internet chatroom experience and from all of the people involved in the story.

While this ‘summary’ of the plot is confusing to read, so is the progress of the tale Atom Egoyan has filmed. He intensifies the drama with moments of utter beauty and shared love as well as condemnations from the people who are adversely affected by Simon’s concocted ‘lie’, a falsity perpetrated by his ‘accomplice’ Sabine. Keeping the action level low, accompanied by the hauntingly beautiful music for solo cello and solo violin by Mychael Danna, and enhanced by the tight cinematography of Paul Sarossy, only makes this little film that much more powerful to observe and digest. As with all of Egoyan’s films, it is the afterburn that lingers in the mind of the viewer that drives the power of the work home. 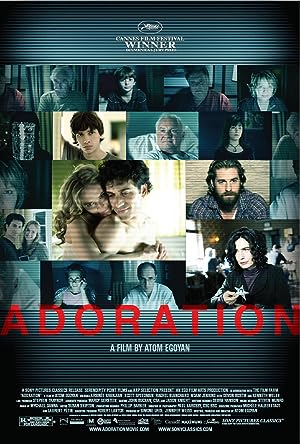 Be the first to review “Adoration 2008” Cancel reply