A determined teenage boy struggles to find acceptance within the Jr. Lifeguards of Hermosa Beach while juggling relationships and challenges in the summer of 1986.

The kid wants to find his missing bicycle, to become a junior lifeguard, and to get the girl he likes. Those are the surface-level conflicts of Age of Summer, which tries to frame these relatively ordinary concerns as springboards for the deeper development of a teenage boy, living near Hermosa Beach in 1986. The movie never reaches anything profound, but it really tries to make us believe that it has.

Most of that attempt comes from a narrator—the rather monotone voice of the teenage boy when he’s an adult. There are important lessons that the nicknamed Minnesota (Percy Hynes White) learns over the course of a summer—about friendship and love and belonging. The screenplay by David B. Harris and director Bill Kiely uses that narration as a shortcut so that their story’s fairly generic main character can appear deeper than he actually is.

The story is mostly about a series of tasks and adventures, in which Minnesota trains to be a lifeguard under the guidance of the rough-but-secretly-proud Tony (Diarmaid Murtagh), sees his friendship with the wimpy Woods (Jake Ryan) fall apart, and learns that Brooke (Charlotte Sabina), the girl on whom he has a crush, is a little more than just an object of his adolescent desire. He also has to steal a marijuana plant from a mostly naked man and encounters a mysterious figure called the Rock God (Peter Stormare), who offers a lot of New Age advice to the boy.

There’s a certain degree of charm to the way the episodic narrative comes across as a string of half-remembered events, filtered through the lessons Minnesota apparently has learned during this supposedly momentous summer. A bike doesn’t matter much in the big picture. Brooke may be his crush, but there are other girls out there. A best friend may have his own growing up to do, and that’s his problem. A dead body puts a lot of life’s little things into perspective.

The kid at the center of Age of Summer comes across as generally likeable but completely non-descript, though. He’s just along for the ride of his time on the beach, while the narrator tells us that it means something. What we see from the main character, as he lives out all of those lessons, is too broad to convince us that it actually has that deeper meaning. 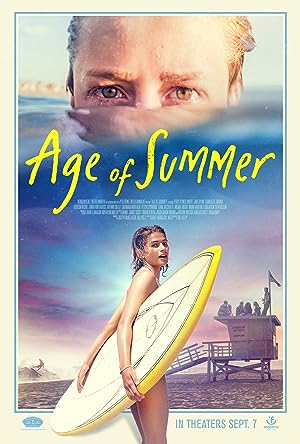