Benny, a college freshman at the University of Akron, Ohio meets and falls for fellow freshman Christopher at a football game. With the support of their families and friends they embark on a new relationship. But a tragic event in the past involving their mothers soon comes to light and threatens to tear them apart. Akron is a moving family drama and a sensitive young adult love story of two young men falling in love in the Midwest and their will to overcome the most painful of truths.

I saw this movie. Akron, at NewFest here in NYC and liked it. Both guys were attractive and it was very romantic, sometimes erotic, and interesting because their relationship was accepted by both families, even the Latino father of the character played by Matthew Frias. Joseph Melendez, the actor who played his father, was at the screening and he mentioned that he was eager to play the part of a Latino father who didn’t, stereotypically, throw his gay son out of the house. The interesting plot really revolved around an event that was not related to the gay theme at all.

However the movie has a 3.7 rating on IMDb which is ridiculous and, to my mind, is another proof that IMDb is being trolled by homophobes. Many years ago the website created a complex rating system that was designed to minimize attempts by the industry to puff up their product, by having all their employees give a film 10 for example, or having a popular star instruct fans to do the same. The problem is that at that time the present culture of mean, negative, trashing commentary was only just rearing its ugly head and IMDb has apparently done nothing to try to minimize this newer phenomenon.

Of the 112 people who rated this movie, 23 gave it a ’10’ and then the ratings gradually ramp down from there until you get to 41 people who gave it a ‘1’ rating. Are we really supposed to believe that 41 people saw this gay themed movie in its very limited distribution and hated it so much that they ran home and logged into IMDb to rate it as low as possible? In addition, none of these 41 people hated it enough to bother to write a single negative review.

It seems to me that if just one anti-gay group told its members to go home, register for IMDb, and trash the film it could be very effective in warping the IMDb ratings for a small film like this….. a church with a large Latino membership in Akron who objected to being portrayed as gay accepting comes to mind….. just sayin’.

So the point of all these words is to suggest that it would be wise to think twice before avoiding a gay themed film just because it seems to have a abysmally low rating on IMDb. 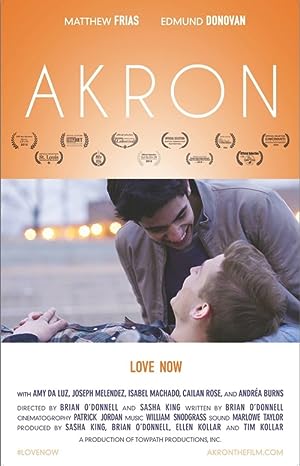 1 review for Akron 2015 with English Subtitles