13-year old Rikke sees Bea, the new girl in her class, as a challenge. After an endurance test to find which of them can lie longer in a circle of flames, they become friends. However, as a result of some unfortunate truths and half-truths, the friendship falters. Rikke feels that Bea has let her down, and resolves to continue the rivalry between them, but now in a less physical, more artful way. In addition we meet Rikke’s elder sister Ninni, who has been in England to learn the language, and has had to leave her great love, a man twelve years her senior. The film is also about the problems Rikke encounters in fulfilling the expectations of those around her as she approaches womanhood.

What’s it like to befriend someone? First you challenge the person to determine whether they’re tough or gentle enough. Then you verify if you can trust them. And finally… well, you’ve become friends already! But here comes the most troublesome part: quarrels, betrayals, or simply disappointment. Can these obstacles ruin the friendship? Or do they build it up actually?

Quite unusual, this story depicts relationship between two schoolgirls Rikke and Bea. One would never guess that girls can be as crazy as boys: they play with matches setting a school building on fire, come running through the opposite sex locker room, and what not! Besides at the age of 13 they start to become sort of obsessed with boys which only complicates the story. Not to mention their relations with siblings and parents.

I like Scandinavian (and Northern European in general) realism: they tend to present people and situations in movies much like they’re found in real life. Just take the father of the family for example: oh, there’s some problem at home? He puts on his cycling suit and goes ride a bike. “I need some fresh air” – that’s the only answer to Rikke’s question on “what’s the matter with my mom and sister?” Adults complicate teens’ lives so very often…

The title of the movie doesn’t mean, of course, that making friends is any different at other age. It’s just that teenagers first realize how complex and multi-layered relations with other people are. Going through all the difficulties, Rikke and Bea end up being the best friends. They’ve learned a good lesson. Now it’s time to move on. So, goodbye 13! ? 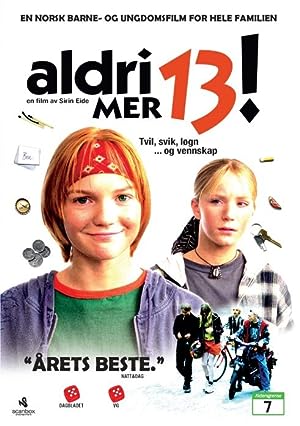