Alexander and the Terrible, Horrible, No Good, Very Bad Day 2014

For 12 year old Alexander Cooper, everyday is a bad day. And his family thinks he’s being silly because they never have a bad day. On the day before his 12th birthday party, he learns that another boy is having a party of his own and everyone is going to it. And another kid punks him online. So at midnight of his birthday, he wishes that his whole family can have a bad day. And things for the whole family go bad, his mom’s car is broken so they have to share a car, his sister has a cold and has to go on stage, his older brother, who’s hoping to get his driver’s license and to bring his girlfriend to the prom, has to deal with his girlfriend’s snootiness and fails to get his license, his mom has a crisis at work which could cost her her job, and his dad who has a job interview has to bring his younger brother with him but because his pacifier is broken he can’t stop crying. Alex feels responsible.

This was a total blind watch. I mean knew nothing about it. I had never read the book (didn’t even know there was a book). Hadn’t even watched the trailer. It was just brief (81 minutes) and lightweight (Disney family comedy) and both of those just happened to meet my particular criteria yesterday. To my complete and utter surprise, I loved it.

Let me just be real clear. I loathe Disney. Loathe it. It’s history and iconography do nothing for me, save perhaps make me a bit queasy. It’s not that I’m some artsy-fartsy, highfalutin type either. Disney just doesn’t agree with me. But despite a lot of Disney trappings, I thought AatTHNGVBD was an energetic and genuinely funny little movie that left me not queasy, but with a bit of a sugar buzz. I don’t know that there’s a genuine moment in the entire thing, but it plays its tune more skillfully than most Disney fare. 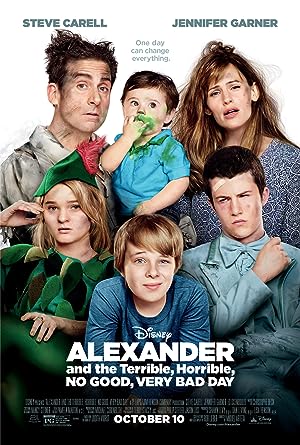 Be the first to review “Alexander and the Terrible, Horrible, No Good, Very Bad Day 2014” Cancel reply