Amar Bondhu Rashed, a fictional story based on the Liberation War of Bangladesh and written by the popular children’s literature Dr Mohammad Jafar Iqbal

“Amar Bondhu Rashed” by Morshedul Islam is an adaptation of a novel of Muhammad Zafar Iqbal under the same title. The crafty tale of the Liberation War of Bangladesh as portrayed in the novel rests in the core of this cinematic endeavour by the director as well. Though cinematically amateurish, this film provides an apt knitting of the main story with the cinematic technique of adaptation.

It is a tale of friendship between Ibu and Rashed (Chowdhury Zawata Afnan). Rashed, a boy of enigmatic and pulsing presence, happens to emerge all on a sudden like a blow. He ripples the lives of his peers with a mysterious Dad, supposedly his only companion. His friendship with Ibu stems and develops on the basis of a strong sense of patriotism. In the backdrop of 1971’s War of Liberation, the story unfolds itself and gradually merges with the private history of Ibu and Rashed.

The film has a good casting. But the character of Rashed is not very well executed. Rashed seems to be too polished to be Rashed himself. Other characters are more or less perfect fit for the demand of the plot. The film may not be entitled to be a film of technical excellence but it has minimum number of flaws. Sometimes the characters are amputated out of the frame. Sometimes the camera moves very little that dampens the sentimental avenues of the plot. The editing is compromised for the sake of the novel at times. Transitions are not smooth but it has to be acknowledged that comprising everything while adapting a two dimensional written discourse into a film is simply absurd a demand. The sound of the film is okay.

The theme of the film is very interesting and ambivalent. For those of us who have read the novel previously, the film refreshes perspectives and thus facilitates newer thematic interpretations. The portrayal of Rashed is enigmatic. He roams around the plot without any definitive clue of his identity. Rashed can be a boy who died during the Liberation War of Bangladesh. He can be a boy who acknowledges the depth of friendship. He can represent the then collective political consciousness of our country. Rashed can be a boy that represents an Icarus-like spirit of transcending boundaries. He can be a metonymy of our 1971 War that means the country along with its people has dashed ahead but not the zeal of the war that is still blindfolded in its adolescence. Interpretations are open and they can go on as perspectives vary.

In a nutshell, this film is worth recommending. Many of us nurture a wrong conception regarding adaptation that a film must follow the exact course of the source which is nothing but weird. This film has been a very good amalgamation of the two adaptation techniques; namely analogy and transposition. It might have the minimum camera movement, but the feel that it provides is nearly priceless. If you haven’t seen Rashed yet, well you haven’t seen Rashed yet!!! 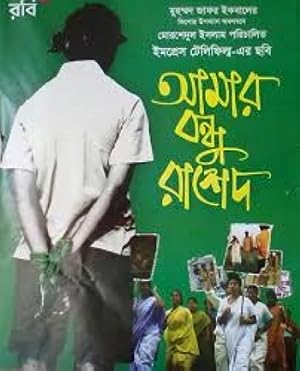