A sexually ambiguous Frenchman tours his native countryside with his naive American lover in pursuit of the ultimate thrill. From the moment they meet, brooding Chris and the beautiful Aurore fall instantly and passionately in love but it s not long before their intense connection is consumed by Chris s dark obsession with gay men. Before long, the pair embarks on a violent and sexual journey filled with seduction and destruction of young gay hustlers. Hard-hitting, intensely sexy and wildly controversial, American Translation is a twisted Bonnie and Clyde for a new generation.

This film is not for everyone, but for certain guys like me it is everything. And I’m talking orgasm time. I think it’s safe to say that 99% of the people in the world will not get this film, but for the 1% of us who do this film is something else – not only a work of art but arousing as well. It deals with a subject that is known only to a very small group of guys who cultivate it as much as they can within safe and sane boundaries. Some guys alas fall off the edge and end up in very dire circumstances. The newspapers are full of these stories. The cops just look the other way. They’ve seen it before and they will see it again. The very core of man’s nature is dark and sinister and the male lead in this film demonstrates that to a degree that is shocking, but also, a turn-on, for those of us consumed with dark and sinister sexual fantasies. 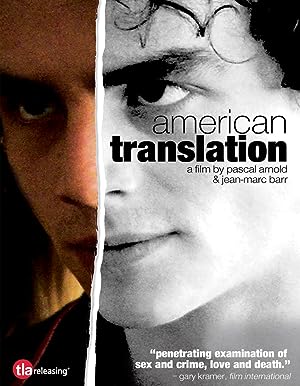