Among the Living 2014 with English Subtitles

Three kids skip school in order to explore an abandoned film studio lot where they catch site of a woman being dragged across the lot by a masked man.

Kids reluctantly go trick-or-treating to some run-down house. The door opens. It’s the lady from Inside who is pregnant this time. Her husband is having some flashbacks presumably related to military duty. He was exposed to some gas that may genetically affect his descendants. Suddenly the woman takes a bat and smashes his head in. She then goes upstairs and complains about someone or something in the room. She’s about to kill it, then the husband shows up and attacks her to protect whatever is in the room. She slits her throat and he removes the fetus from her body and leaves.

So far so good. Two years later we meet three annoying troublesome teens. They run away from school instead of showing up for detention, smoke weed, try to burn down a barn, nearly kill the barn’s owner with a hatchet. They go to an abandoned movie studio where they find a woman screaming in a car trunk. They call the police who find nothing. But we know someone lives in one of the studio buildings.

The kids are returned to their parents. And eventually something shows up at each kids’ house to kill the residents. We learn who is doing the killing and of course the final family will have to fight back.

If this were a movie made by someone unknown it would be a bad movie but given that it was made by Bustillo and Maury makes it even worse. And Among the Living is unfortunately very bad. The movie never takes off, it never goes anywhere. After the intro, it creates zero tension, zero thrills. There is no central character, no one to root for. The villain is weak, too, lacks personality and doesn’t look cool either. I counted one interesting death scene. I can’t really think of a reason to recommend this movie. 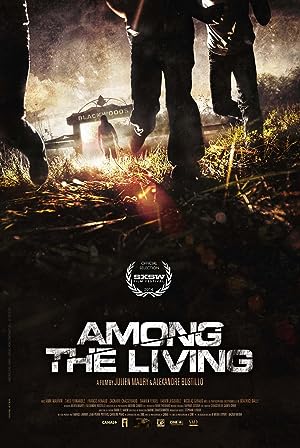