Openly gay banker Daniel debates whether to return to Australia or stay in Hong Kong when he meets Kafka, a straight swimming instructor. The young men fall in love, believing that their love can bridge anything, despite their difference in sexuality and Kafka’s increasing drug use. Daniel does not regret his love for Kafka, who tries to love him back against his nature. But a flashback memory from Kafka’s past makes it difficult for their relationship to work.

The character nicknamed Kafka, after his favorite writer, is an interesting guy; a true rebel with a troubled past. Damaged, but an obviously good guy, Kafka has grown up poor, and some traumatic events in his life have caused him to be tough. Kung Fu expert, his addiction to amphetamine does not scare off Daniel, a rich and successful banker on a business trip to Hong Kong, from Australia. Daniel is seemingly Kafka’s opposite, with his expensive business suits and luxurious apartment, compared to Kafka’s tiny dwelling, cutting edge hairstyle and life on the edge existence. Not to mention that Daniel is gay while Kafka is straight. In fact the only thing that the two seem to have in comment is the fact that they are both Chinese. The exciting friendship/relationship that develops between the two very attractive leads is at the center of the film. “Amphetamin” is filmed with wonderful style, and features top-notch editing and cinematography throughout. This is an emotional film, with a lot of highs and lows. Kafka is certainly not the stereotype drug addict; he became exposed to the drug through his brother, a dealer who made his living manufacturing and selling amphetamine. A violent and unsettling event in Kafka’s life has caused him to be very wary of people, so when he decides to let Daniel get close to him, it is nice to see. It is refreshing to see a gay-themed film where the sexuality of the characters is not the focus of the film. The problem with most films of this genre is that they tend to obsess on the sexual aspect only, alienating a lot of viewers who might otherwise be able to enjoy the film. “Amphetamin” deserves credit for presenting same-sex relationships as something other than a freak show; This is simply a film about two lonely people who find each other and experience some amazing moments, and the fact that they are both men is not really important. And the two make a great team. In many scenes they seem like two little kids playing silly games and having a great time. As i watched the movie I hoped that things would turn out well for both of them, especially Kafka, who has not had it easy.

“Amphetamin” is a very enjoyable and visually pleasing film experience. Filled with beautiful imagery and a beautiful cast, and taking place in Hong Kong, one of the most fascinating cities in the World. I did find myself wishing that there was more kung-fu scenes in the film, as actor Byron Pang is very talented in the art. But that is a minor complaint. I recommend seeing this very cool, visually stunning art-house film. 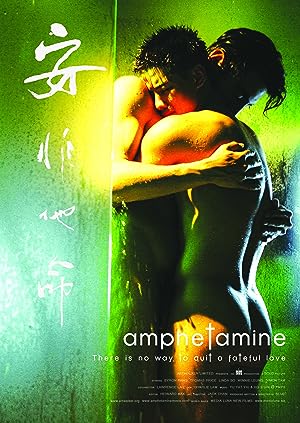 2 reviews for Amphetamine 2010 with English Subtitles