In the cruel world of junior high, Edwin suffers in a state of anxiety and alienation alongside his only friend, Flake. Misunderstood by their families and demoralized at school daily, their fury simmers quietly until an idea for vengeance offers them a terrifying release. Based on the acclaimed novel “Project X” by Jim Shepard, this unflinching look at adolescence explores how the powerful bonds of childhood friendship and search for belonging can become a matter of life or death.

This film, dark and spare in the script and the actual cinematographic light cast on its main characters, succeeds in getting the viewer inside every character.

It makes clear the gnarly inchoate incompetence and pain of being thirteen year-old boys, friends since kindergarten, unsuccessful in ‘socializing’ in middle school.

Clear also is the wide gap parents try to bridge, when they try to fix their kids, objectify their children as problems to be solved by programs and processes, instead of wordless aimless love.

“And Then I Go” has a plot, which dimly echoes the Columbine school tragedy, but that echo isn’t the point of the film at all.

It’s about the hundreds of blows that being “othered” inflict upon a young and fragile sense of human worth, and the dark pearl that can rise from being hated or dismissed or being made small, a nick at a time.

It’s about the tragedy of blind loyalty also. It’s about a lot of things, some of which you will see, though I have missed. 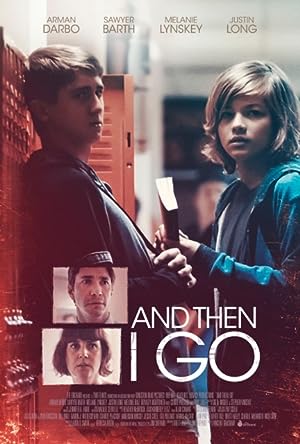