Pol is a teenager with a seemingly calm life. He lives with his brother, and is still in high school. However, Pol has a secret: Deerhoof, a cuddly teddy bear who thinks, moves around, and with whom he shares his best moments. Life goes on as normal until the arrival of Ikari, an enigmatic student who seems to be hiding something. Pol is fascinated by his new classmate and attracted to the dark side he harbors. An inexplicable death and a series of strange events will transform the meek student’s routine into a fantastic adventure, which will take over their lives.

Pol is a teenage boy with a self-aware English speaking teddy bear named Deerhoof. He lives with his older policeman brother who suspects he’s talking to the bear again. His best friend is the girl Laia who pines for him. He is fascinated with the mysterious new boy Ikari. Albert (Martin Freeman) is their teacher in the English school. Fellow student Clara goes missing when her car is found in the lake.

There is a lifelessness about this movie. All of the teens seem to be bored with the world. The bear is interesting. The self cutting is a bit disturbing. It seems to be a lot of strange things being jammed together in this movie. Oriol Pla is pretty looking boy but I’m not convinced that he’s a good actor. Roser Tapias is slightly more compelling but that may be because she’s a more compelling character. The boy is a mystery at the start and still a mystery in the end. 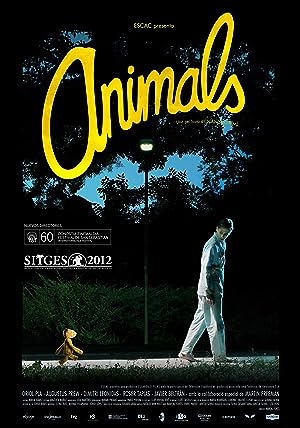 Be the first to review “Animals 2012” Cancel reply