A family weekend is fraught with emotional landmines for mercurial and sensitive Lynn (Barkin) as she arrives at her parents’ Annapolis estate for the marriage of her estranged eldest son Dylan (Michael Nardelli), accompanied by her three younger children (Ezra Miller, Kate Bosworth, Daniel Yelsky). Lynn’s hopes for a joyful reunion are crushed as her wry but troubled middle son Elliot (Ezra Miller) lobs verbal grenades at his mother and her relatives while daughter Alice (Kate Bosworth), a fights valiantly to keep her longtime demons under control. The weekend quickly unravels as Lynn demands to be heard by her aloof, disdainful mother (Ellen Burstyn), ailing, distant father (George Kennedy) and ever-judgmental sisters (Siobhan Fallon, Diana Scarwid), but most especially by her ex-husband Paul (Thomas Hayden Church) and his hot-tempered second wife Patty (Demi Moore). Confronted with the deeply painful, half-buried truths that have given rise to the family’s primal web ofresentments and recriminations, Lynn struggles to maintain her equilibrium as her best attempts at reconciliation veer quickly off-course.

I saw this film at Sundance ’11…never heard of the director, didn’t know what I was walking into.

The film opens up with 4:3 aspect ratio home footage and I’m thinking…”Oh no, what did I get myself into?” But the pace was fast and so I figured, “I’ll keep watching.” I’m glad this film held my attention and ant-sized span of interest.

This is one of the best films I’ve seen all year.

The acting: (including especially the supporting actors) it’s fantastic and real. This film is about real reactions, situations, dramatizations, and family dynamic. I would love to read the screenplay and see how closely it was followed.

Sam Levinson has a very successful career ahead of him. After the film there was a Q&A and Sam nervously got on stage to introduce the actors. He started forgetting the names of people and there was some laughter in the audience. I think everyone felt the same way about the film afterwards–awestruck and humbled by his demeanor.

I’ve never met Sam, but he seems to be an endearing person and I think he put his heart into this film. I aspire to direct great films like Another Happy Day. 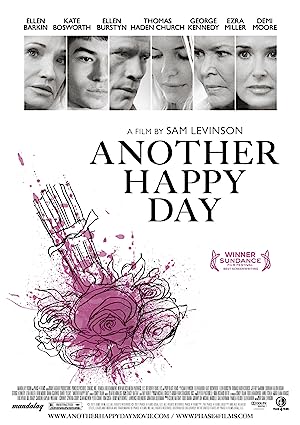 Be the first to review “Another Happy Day 2011” Cancel reply