On the Wirral in the grim early years of Margaret Thatcher’s premiership, the opportunities for thrill seeking young men looking to escape 9 to 5 drudgery are what they’ve always been: sex, drugs, rock n’ roll, fashion, football and fighting.

‘Awaydays’ is not your typical football hooligan film, the sub-culture of football hooliganism in the early years of Thatcher’s Britain is there to set the brooding scene, however it is evocative the homo-erotic relationship between Carty (Nicky Bell) and the eccentric Elvis (Liam Boyle) that takes centre stage and gives Paul Holden’s film slightly more depth than simply being a film about men taking out their boredom in the form of fighting on a Saturday afternoon.

Paul Carty is a suburban male who is drawn towards the ‘The Pack’, a group of thugs who take their excitement from fighting on a Saturday afternoon all across Britain, through these encounters he grows closer and closer with a bohemian working-class character in Elvis. Elvis just wants to move away to Berlin and start a new life around people who understand him, while Carty just wants to find direction in his life after his mother’s death. As they connect through their mutual love of Bowie, the Liverpudlian music scene and Art, they develop an increasingly complex relationship that is bordering on the homoerotic. It is this intricate bond between these two seemingly different, yet very similar and flawed ‘men’ that keeps the film ticking over. If you removed this key component then the film falls a little flat, with Kevin Sampson’s script missing out many explanations to key elements such as why Carty is drawn towards the allure of the ‘The Pack’ in the first place and the death of John. With that said, it is hauntingly shot with a soundtrack that compliments Pat Holden’s sombre directorial style, and even though at times he has a tendency to delve too much into the LSD-induced hallucinogenic state’s of both boys minds, he does it with little expense to the viewer.

If you want a film that doesn’t simply look at the male phenomenon of having a good scrap on a Saturday afternoon because we’re all bored and working class zombies in a capitalist machine (‘Football Factory’, ‘Green Street’) then ‘Awaydays’ is for you, as it offers just that bit more and is akin to something of a ‘football-love-story’. 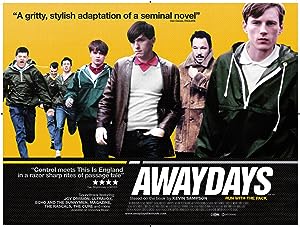 Be the first to review “Awaydays 2009” Cancel reply